All of Canada’s individual track and field medallists from the IAAF World Championships Beijing 2015 were in action at the Canadian Championships in Edmonton from 7-10 July, but it was sprinter Brendon Rodney who produced the performance of the weekend with his 19.96 200m victory on Sunday (10).

The 24-year-old had hinted that he was on course for something special after breaking the championship record in the heats with his run of 20.25. In the final, though, he would be up against world 100m bronze medallist and double Pan-American Games champion Andre De Grasse.

As it happened, Rodney was never seriously challenged. The NCAA bronze medallist was ahead of De Grasse and level with Aaron Brown at half way. He then powered down the home straight to win in a lifetime best of 19.96 (1.1m/s), moving to second on the Canadian all-time list.

Brown and De Grasse crossed the line together in 20.32 with Brown getting the verdict in a photo finish.

“I was just filled with emotions,” Rodney told reporters after the race.  “We're just showing the world that Canada's back, and we're ready to run.”

Bishop was a runaway winner of the 800m, clocking 1:59.32, while Barber sailed over 5.61m in the pole vault before retiring after two failed attempts at 5.71m.

Barber’s fellow world champion Derek Drouin was equally as dominant in winning the high jump. He led throughout and sailed over 2.30 on his first attempt before bringing down the bar three times at 2.35m.

Canada’s established stars weren’t the only winners in Edmonton. Rising two-lap talent Brandon McBride led from gun to tape to win the men’s 800m in 1:45.25. McBride, who last month set a PB of 1:44.50 to finish second at the NCAA Championships, ran a controlled first lap within 52 seconds before digging in during the second half to extend his lead.

Crystal Emmanuel pulled off a sprint double, winning both the 100m and 200m by small margins. She won the 100m on Saturday in 11.26, finishing just 0.01 in front of hurdles specialist Phylicia George. One day later, she took the 200m title in a marginally wind-assisted 22.83 (2.1m/s) with Kimberly Hyacinthe taking second place in 22.88.

Both of the women’s one-lap events produced a trio of Olympic qualifiers.

First up was the 400m hurdles, where Noelle Montcalm uncorked a huge season’s best of 55.83 to secure her spot on the Olympic team. She held off a fast-finishing Sage Watson, who crossed the line in 55.88, while Chanice Chase came through for third in 56.06.

Pre-race favourite Carline Muir went out hard and had built up a five-metre lead before coming into the home straight. But the 28-year-old, who last month clocked a PB of 51.05, began to tie up in the closing stages. Alicia Brown, meanwhile, put in a late surge but Muir just about managed to hold on, winning in 51.79 to Brown’s PB of 51.84. Teenager Kendra Clarke came through for third in a PB of 52.19.

Canada’s top combined eventers were also in action. World indoor champion Brianne Theisen-Eaton ran 23.57 (-0.7m/s) in the 200m heats, while world silver medallist Damian Warner finished second in the long jump with 7.57m and ran 14.14 (-1.5m/s) in the heats of the 110m hurdles.

BACK
Pages related to this articleAthletes
Brendon RODNEY 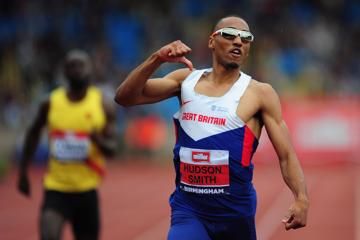 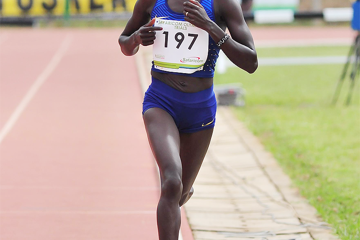 Cheruiyot to go for Rio distance double after... 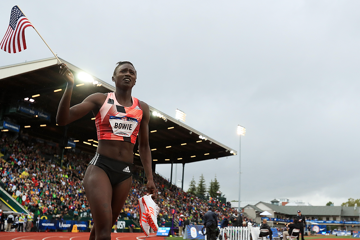 Records broken on final day of US Olympic Tri...