Jamaica's Nesta Carter provided the highlight of the 'Meeting de Madrid 2013', an IAAF World Challenge Meeting, on Saturday (13) with an outstanding 9.87 run in the men's 100m.

For the second year in a row, the Moratalaz stadium witnessed a time under 10 seconds in the shortest event on the programme.

The race was held down the back straight to take advantage of a following wind in that section and it paid off since the double Olympic 4x100m Relay gold medallist was into his stride quickly, despite a poor reaction time of 0.234, to take a comfortable win in 9.87, his fastest time for three years, albeit helped a nearly perfect tailwind of 1.8 metres-per-second.

Drawn in lane four, Carter romped home head and shoulders ahead of the US pair of Mookie Salaam, who was second in 10.07, while Calesio Newman was third in 10.10.

“I felt OK today, good time," said Carter. "I’m not sure about my next competition, right now I’ll be back on training. We have a powerful pool of sprinters ready for the Worlds, let’s see what happens."

Angel David Rodríguez finished fifth in 10.15, just 0.01 off his own Spanish record.

US middle-distance runner Brandon Johnson was a brilliant winner in the men’s 800m. Spain’s Kevin Lopez had set himself the target of breaking his own national record of 1:43.74 and went off closest to the pacemaker, Kenya’s Sammy Kirongo, but the 50.24 split provided by the rabbit proved to be too quick for the small Spaniard, who was overtaken by Johnson before just before 600 metres.

Johnson finished strongly off the final bend and lowered his personal best from 1:43.97 to 1:43.84, set when finishing third at the US Championships in Des Moines last month.

The women’s 100m was taken in style by the 26-year-old Barbara Pierre.

Competing against five fellow US sprinters and a lone Jamaican, Pierre managed her second-best time ever with a 10.92. Shalonda Solomon was second in a season’s best of 11.04 while Alex Anderson had to settle for third on this occasion in 11.07 to complete a US podium.

Barrett back on top

The highly anticipated women’s High Jump saw another US victory as the London 2012 Olympic Games silver medallist Brigetta Barrett bounced back after losing at the IAAF Diamond League in Paris eight days ago.

Barrett and Croatia’s 2009 World champion Blanka Vlasic were successful on their respective second attempts at 1.98m but then failed four times at 2.01m before Vlasic conceded the win to her US rival.

Bulgaria’s Georgi Ivanov headed the Shot Put start lists ahead of the reigning World champion David Storl and he proved it was not a fluke.

Surprisingly, neither of them, nor anyone else, was able to throw farther, but as a momento of his memorable win and being fully aware he had just beaten the reigning World champion and Olympic silver medallist, Ivanov asked the organisers for a copy of the official results.

Bahamas’ Ramon Miller secured the win in the men’s 400m in a tight finish with the USA’s Manteo Mitchell, the pair clocked at 45.20 and 45.25 respectively.

USA’s Justin Gaymon narrowly beat his compatriot Johnny Dutch in the men’s 400m Hurdles, with the times being 48.69 and 48.75.

Germany’s Olympic Javelin bronze medallist Linda Stahl captured the win in her specialist event with a third-round effort of 60.61m while Russia’s Irina Gumenyuk was successful in the Triple Jump thanks to a sixth-round leap of 14.32m. 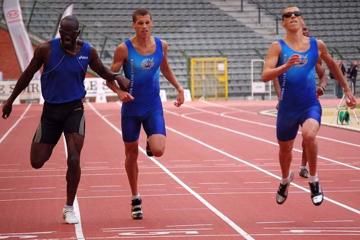 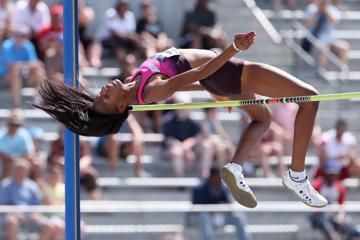