After an impressive battle with fellow Kenyan Bernard Koech and Ethiopia’s Birhanu Girma, the 28-year-old Chebet won in 2:05:36, taking five seconds off the course record he set last year.

A group of six pacemakers and a big leading group of thirteen athletes set out in pursuit of the 2:05:41 course record. Going south along the Amstel River, the runners had to battle a strong headwind between 15km and 20km.

Shortly after the turning point at the village of Ouderkerk, the lead group passed the half-way mark in 1:02:38. Kiprop Limo was the last pacemaker to step out the race, having brought the leaders to 30km in 1:29:13.

After that, it wasn’t Chebet who picked up the pace, but 25-year-old Koech. After his 2:04:53 debut in Dubai earlier this year, he was one of the favourites in Amsterdam. He pushed firmly and opened a gap of 50 metres between him and the rest of the group.

Just Chebet and the less favoured Birhanu Girma from Ethiopia were able to lodge a counter-attack.

“I didn’t worry, because I felt very strong,” said Chebet after the race. “I just was looking at my watch and I knew that I had to wait a few kilometres more.”

When Chebet finally made his move, no one could keep up with him and he went on to cross the line in 2:05:36, his fourth sub-2:06 clocking of his career and just nine seconds shy of the PB he set in Rotterdam two years ago.

“I know this course and I always wait for the Rijksmuseum, at about four kilometres from the finish-line in the Olympic Stadium. That’s the best moment for me to accelerate,” said Chebet, who was competing in Amsterdam for the fourth time, having finished second on his debut in 2010.

The temperature of 13°C was pleasant enough to bring a lot of spectators along the course. “People here in Amsterdam already now me by now,” added Chebet. “They really were cheering me a lot. That’s why I like to come back here. But I also appreciated the work of the pace-makers. They did a good job for us.”

Girma missed a bottle at the last drinking spot and had to return to get it, but was still able to catch Koech and finished second in 2:06:06, taking more than two minutes off his PB. “I’m not completely satisfied,” he said. “The result could have been a bit better, but I wanted to run carefully.”

Koech, who finished third in 2:06:29, complained about the pain in his back. “That’s the reason that I couldn’t push anymore from the 33rd kilometre.”

Former Dutch record-holder and 1982 European champion Gerard Nijboer  - the only other man to win the Amsterdam Marathon four times – was watching Chebet at the finish-line. “I’ve heard about that,” said Chebet with a smile. “So I think I have to come back next year to win here again. I can go to some other Marathon to improve my personal best. But a victory is very nice also.”

In the women’s race Valentine Kipketer was out on her own. The 20-year-old was competing in just her third Marathon of the year, having won the Mumbai Marathon in January in 2:24:33 before dropping out of the World Championships Marathon in Moscow.

USA’s Serena Burla finished second in a PB of 2:28:01. “Amsterdam is amazing. I was looking for a new experience and as someone who beat cancer, I also decided to run in Amsterdam because of the Golden Shoelace Campaign. With this charity programme we support the research into cancer at the VUmc Cancer Center here in Amsterdam.”

The TCS Amsterdam Marathon welcomed a record number of 42,000 runners from more than 80 countries. Almost 15,000 raced the full distance, while others contested the Half-marathon or the 8km events. 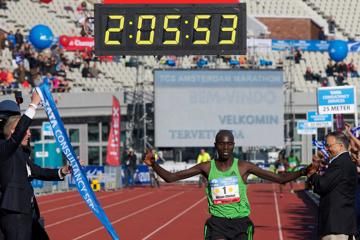 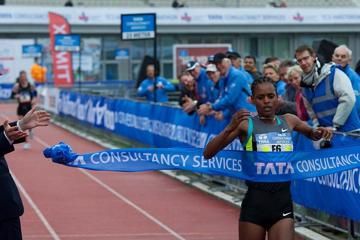