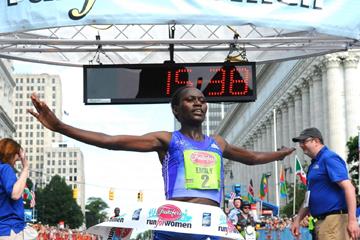 Kenya’s Emily Chebet got her hat-trick of wins at the annual Freihofer’s Run for Women, an IAAF Silver Label Road Race, winning the 5km race in 15:38 on Saturday (30).

Perfect running weather and a new course greeted a field of 3807 runners. A redesigned course in Albany, upstate New York, was made necessary by a beautification project of the stunning Empire State Plaza and a two-year construction project at the New York State Museum, a change that will remain in place for the race through 2016.

The opening kilometre was passed by the leaders in a near-pedestrian 3:21 with the first mile reached in a comfortable 5:20, which meant that it was quickly apparent that Chebet’s 2010 course record of 15:12 – she also won in 2013 – was unlikely to be challenged on this occasion.

Burundi’s US-based Diane Nukuri featured most often to the fore of the large leading group of approximately 25 women.

Kenya’s Cynthia Limo, who had logged a 5km personal best of 15:12 in Boston last month, was also alongside her. But, in reality, there was no leader as some of the world’s top female distance runners were just watching each other for much of the first two kilometres.

The field still hung together along the shaded roadways of Washington Park. A second kilometer of 3:14 and a third in exactly the same time brought the field to 3km in a time of 9:49, and two miles in 10:29.

At this stage, the leading pack had by now been trimmed to about a dozen.

Finally, a decisive move came when leaving the park, with the course making a right-hand turn back on to Washington Avenue for the three-quarter mile stretch to the finish line.

Limo injected a surge that was immediately covered by Chebet and Ethiopia’s Buze Diriba.

With the expanse of Washington Avenue and its progressive downhill before them, Limo, Chebet and Diriba raced shoulder to shoulder, the USD $10,000 winner’s cheque providing an extra incentive, as if it were needed.

With less than 400 metres remaining, the two-time world cross-country champion went through the gears before crossing the line three seconds in front of her compatriot Limo, who was second in 15:41.

Diriba was third in 15:45 with 2014 US half marathon champion Serena Burla the first domestic runner home, finishing eighth in 16:11.

George Regan, event director since its inception in 1979, was ecstatic about the race, its outcome and the positive comments about the new course.

“To have a three-time champion is magnificent,” said Regan. “Emily is now officially one of the Freihofer’s greats, but it was just a great day overall. We had participants from 20 states and 22 countries."