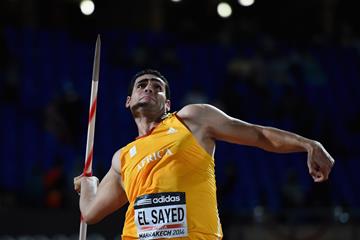 Not so much the IAAF Continental Cup as the champions’ cup of male javelin throwers.

El Sayed has led the world list this summer with the 89.21m throw he unleashed at the IAAF Diamond League meeting in Shanghai in May. It was rather fitting, then, that the 25-year-old Egyptian should lead all the way in the last big competition of the year.

Only Veseley could summon any kind of response, throwing 83.12m, which proved good enough to secure second place. Walcott and Yego did improve, though, finishing third and fourth with 83.52m and 83.06m respectively.

“I did a good thing for my team,” said El Sayed, the first non-European winner of the men’s javelin in the history of this competition. “It’s an intensely satisfying feeling, even if I injured my foot on my last attempt. My next goal is gold at the World Championships in Beijing next year.”