Course record for Kiprop as Veiga out-sprints Girma in Madrid

With temperatures of barely 4°C at the start, the three pacemakers led the front group in the men’s race, setting promising splits which suggested a course record was on the cards. By the 15km point there was still a large lead pack timed at 45:44 with the eventual winner running cautiously at the back.

The half-way point was reached in 1:04:20 and by then only three men remained at the front – Ethiopia’s Herpasa Kitesa and Kenyan duo Nixon Kurgat and Elijah Sang. Meanwhile Francis Kiprop – a 2:07:04 performer – was some 50m adrift.

At 35km, Kurgat led by seven seconds from a resurgent Kiprop for a 1:46.27 split which seemed to indicate that a sub-2:10 clocking was possible. But once again, the uphill closing 7km ruined the chance of achieving that target

The decisive movement came just before the 40km mark when the 30-year-old Kiprop finally managed to catch his compatriot after a thrilling pursuit. From then on, Kiprop – a former runner-up in Berlin – extended his lead to romp home unopposed in a course record of 2:10:37. Competing in his 19th Marathon, it was just the second 26.2-mile victory of Kiprop’s career; his previous win coming in Beijing in 2011.

Kurgat finished 16 seconds behind, still ahead of Moses Arusei’s previous course record of 2:10:54 set in 2011.

“I’m really satisfied with my win which I would like to dedicate to the Boston Marathon victims,” said Kiprop. “I’m also very grateful to the Madrid fans as they have cheered on me throughout, their support was great.

“I knew the course as I finished third two years ago so I decided to run conservatively for the first half of the race. I felt pretty good from 35km onwards and could overtake Kurgat in the closing stages.”

The women’s race – held simultaneously with the men’s – became a two-horse battle between Ethiopia’s 2010 and 2011 winner Desta Girma and Spain’s Vanessa Veiga, who was competing in just her third ever Marathon.

With just 5km remaining, it seemed that – barring disaster – the Ethiopian would add another title to her Madrid collection, but the 33-year-old Spaniard never surrendered and was able to reel in Girma just 50m from the line, much to Girma’s frustration. Veiga was timed at 2:36:38 to her rival’s 2:36.44.

Veiga ran in the company of her husband, 2003 World Marathon silver medallist Julio Rey, for the second half of the race, while Julio’s younger brother Fernando helped Veiga in the second and toughest half.

“All my efforts over the previous months were focused on today’s race,” said Veiga, the first Spanish winner since 1998. “Despite not being among the favourites, I had dreamt of the win but I had to fight to death to get it.

“My husband and brother in law’s help has been vital. Today it’s my father and uncle’s birthdays, so this is the best possible present for them,” concluded Veiga, who emotionally received the visit of her three kids immediately after crossing the finish line.

BACK
Pages related to this articleAthletes
Vanessa Veiga 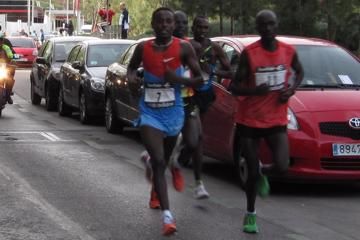