Birhanu and Melkamu make it an Ethiopian double in Daegu

Girmay Birhanu and Meselech Melkamu lived up to their status as pre-race favourites at the seventh edition of the Daegu Marathon, winning the men’s and women’s races respectively at the IAAF Silver Label Road Race on Sunday (5).

It was the third time in six years that Ethiopia had won both races in Daegu. For both athletes, it marked their second marathon victories of their career.

Birhanu triumphed in 2:07:26, the second-fastest winning time in the history of the race, while Melkamu won in 2:27:24, finishing more than two minutes ahead of her nearest rival.

On a chilly morning in which 14,452 runners took to the streets of Daegu, Birhanu was one of a lead group of six men in the first half, along with Kenyan duo Stephen Chemlany and Benjamin Mutai.

Several miles from the finish, Birhanu finally shook off the challenge of Chemlany and Mutai, forging ahead to cross the line in 2:07:26.

Chemlany finished second in 2:08:21, the fourth-fastest time of his career and just two minutes shy of the PB he set last year, also in Korea.

In third, Mutai took more than two minutes off his best time with 2:08:54, smashing the PB he set six years ago when winning in Monaco.

The women’s race played out in much the same way as the men’s. Melkamu was initially part of a lead group that also included compatriot Dinkinesh Mekash and Japan’s Ayumi Sakaida.

But in the second half, Melkamu forged ahead and built up an unassailable lead, crossing the line in 2:27:24.

Melkamu’s time may have been the slowest of her marathon career so far, but it was her first victory since her triumphant marathon debut in Frankfurt three years ago.

Mekash, who earlier this year won the Mumbai Marathon, clocked a season’s best of 2:29:44 to finish second.

Competing in just her third marathon, Sakaida smashed her PB by more than three minutes to finish third in 2:30:39.

Yeum Ko-Eun, the top Korean finisher in fifth, made an even bigger breakthrough in just her second race over the classic distance. Having clocked 2:43:33 to win in Chunchon last October, Yeum bettered that time by almost nine minutes, clocking 2:34:41. 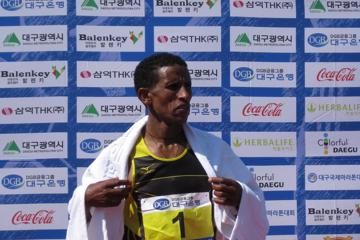 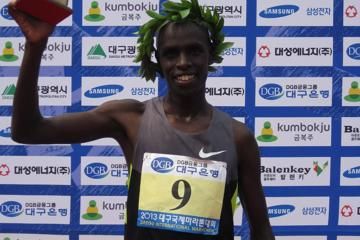