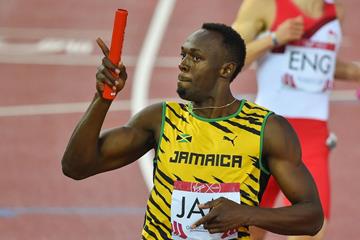 Bolt brings down the curtain on the Commonwealth Games

After his many successes at the Olympic Games and IAAF World Championships, Usain Bolt got the first Commonwealth Games gold medal of his glittering career on the final night of competition in Glasgow, anchoring Jamaica to victory in the men’s 4x100m in front of an enthralled crowd at Hampden Park on Saturday (2).

It was a night where Kenya took their gold medal tally to ten, two from the usual source of the endurance events, but the other was a historic javelin gold medal from Julius Yego.

However, the closing act of a superb seven days was given to Usain Bolt and he delivered in typical style.

England held a marginal lead at the final changeover, but Bolt thundered past European 200m bronze medallist Danny Talbot to cross the line in a Games record of 37.58.

Jason Livermore, 100m champion Kemar Bailey-Cole and Nickel Ashmeade played the supporting roles to Bolt as England won the silver medals in 38.02, and Trinidad and Tobago were third in 38.10.

In the women’s 4x100m, Jamaica were even more impressive. A formidable quartet of Kerron Stewart, Veronica Campbell-Brown, Schillone Calvert and Shelly-Ann Fraser won by a clear 10 metres in another Games record of 41.83. Nigeria were second in 42.92 and England took the bronze medals in 43.10.

In the 4x400m, Jamaica were red-hot favourites in the women’s race, having swept the medals in the individual one-lap final earlier in the week and they duly fulfilled predictions.

Stephenie Ann McPherson, Novlene Williams-Mills and Christine Day were joined by Anastasia Le-Roy and they duly won in another Commonwealth Games record of 3:23.82.

However, it was not easy as many may have predicted and Nigeria were spirited silver medallists in 3:24.71. England were clear third in 3:27.24 with world champion Christine Ohuruogu running the first leg.

The men’s 4x400m produced a thrilling finish with England’s Matthew Hudson-Smith just out-dipping Bahamas’ Chris Brown for the victory. England clocked 3:00.46, just 0.05 ahead of the silver medallists while Trinidad and Tobago won bronze in 3:01.51.

Julius Yego made history by becoming the first Kenyan athlete to win a Commonwealth Games gold medal in a field event.

The javelin thrower did so despite suffering a pulled groin muscle in the warm-up.

Yego launched the spear to 83.87m in the third round which a strong field could not match. Olympic champion Keshorn Walcott came closest in the final round with 82.67m, but the Trinidad and Tobago thrower had to be content with silver this time, despite throwing a national record of 85.28m in qualifying on Friday. Australia’s Hamish Peacock won the bronze medal with 81.75m.

“It was not easy as I picked up an injury in the warm-up area," said Yego. "I almost pulled out of the competition because my groin was really painful, but I said ‘no, this is the championship I have been working for all season’. This (the Commonwealth Games) is where our legend Kipchoge Keino made history for Kenya and now I am making history in the field events."

Gold also went to Africa in the men’s triple jump. South Africa’s Godfrey Khotso Mokoena was a clear winner with 17.20m, just short of his national record of 17.25m which dates back almost a decade to 2005, having made a successful return to the event this summer after seven years almost exclusively as a long jumper.

“It just shows that the more mature you are, the better you are at triple jump,” joked Mokoena.

Rain made conditions difficult for the women’s pole vault final with only four athletes managing successful clearances. But, after an initial scare, the class of defending champion Alana Boyd shone through.

The Australian only cleared her opening height of 4.15m at the third time of asking but, as the rain eased, she sailed over both 4.35m and 4.40m on her first attempts. Wales’ Sally Peake won the silver medal with 4.25m.

James Magut finished the strongest in the men’s 1500m to improve by one place on his silver medal from four years ago, clocking 3:39.31. His 18-year-old team mate Ronald Kwemoi was overhauled in the final metres and finished just 0.22 adrift.

Similarly, New Zealand’s Nick Willis just edged out South Africa’s Johan Cronje in a tight contest for the bronze medal by 0.05, the former crossing the line in 3:39.60.

The women’s 5000m saw another thrilling finish as England’s Jo Pavey, now 40, defied her years to lead at the bell.

Kenya’s world silver medallist Mercy Cherono made her decisive move around the final turn, sprinting home in 15:07.21. Pavey and Cherono’s compatriot Janet Kisa fought out silver down the closing straight with Kisa just holding off the fast-finishing Pavey by 0.06 to finish second in 15:08.90.

Cherono later explained why she decided to strike for home with 200 metres remaining: “I was just waiting to see my colleague, but when the England lady (Pavey) came, I decided to move. I had the feeling I could go. It was my mission to come here and be on the podium.”

It meant that Kenya had won the gold medal in every women’s endurance event from 800m to marathon at this edition of the Games.