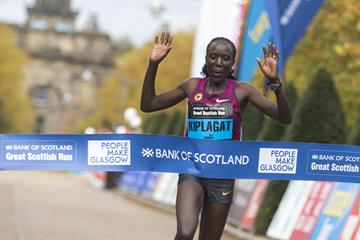 Two-time world marathon champion Edna Kiplagat pulled out an impressive victory at the Bank of Scotland Great Scottish Run in Glasgow to lead home a Kenyan 1-2 over the half marathon distance at the IAAF Gold Label Road Race on Sunday (5).

The 34-year-old, preparing for next month’s New York Marathon, pulled away from three-time event winner Caroline Kilel just after the halfway point and eventually finished in a course record of 1:07:57, an emphatic 56 seconds ahead of her compatriot.

“I started picking up from five kilometres and that’s when I found my rhythm,” said Kiplagat. “Then I pushed it faster towards the closing miles. We tried our best and we were happy to come 1-2 for Kenya. My body responded well and my training is on track.”

New York on 3 November will be the next stop for Kiplagat but she has already made a third global title in Beijing next year her main priority for 2015.

“That’s what I really want,” she said. “Three titles would be nice.”

Olympic champion Tiki Gelana was dropped early in Glasgow and could come only third in 1:10:37 while local Scottish star Susan Partridge, 10th in the World Championships marathon last year, was the first Briton home in fifth place in 1:12:12.

“It’s been a long season,” said Partridge, who also picked up a national title despite being unable to repeat her overall win from 2013.

“I was hoping there might be a little more left but there just wasn’t.”

South Africa’s Stephen Mokoka emerged the strongest from an evenly-matched leading pack in the men’s race to win the Great Scottish Run in 1:01:25, boosting his own build-up for the forthcoming Shanghai Marathon.

The versatile 29-year-old, who set a personal best of 1:00:47 at the IAAF World Half Marathon Championships in Copenhagen earlier this year, sat among a four-strong group that headed the field for much of the race, taking turns to stride ahead.

“There were times when I moved into the front when we were doing 4:45-minute miles and I wanted to improve that to about 4:37 because I knew my target was about 61 minutes,” he said. “When I felt the pace was slowing, I wanted to push it.”

Eventually, Mokoka found an extra gear and made his move.

Kenya’s Stephen Chemlany, the marathon silver medallist in the same Scottish city at the Commonwealth Games earlier this summer, finished second in 1:01:32 with Mark Kiptoo just two seconds further back in third place.

“I ran 61 so that’s a good sign, one month out from the Shanghai Marathon,” added Mokoka. “It shows my programme is going well but now I’ll go home and work on a few things.”

There was no repeat win for Haile Gebrselassie who was forced to pull out after just five kilometres with the Ethiopian legend toiling due to a bout of asthma.

“My lungs were finding it hard,” said the 41-year-old. “They were burning and I was struggling from the beginning.”

With Gebrselassie out of contention, the mantle of local favouritism fell to Scottish runner Callum Hawkins. The British international ran 1:03:06 on his half-marathon debut to lead home the domestic challenge in sixth place.

“It was probably a minute better than I was expecting,” said the Glasgow native, who has been training in Colorado under the watch of former marathon world record-holder Steve Jones.

“I was watching the clock tick down and thinking it would be nice to get under 63 but I’m pretty happy.”

About 30,000 participants of all ages started Scotland's biggest running event, taking part in either a 10km or the half marathon through the heart of the city.