With a PB of 2:07:34 set five years ago in Paris, 33-year-old Shentema was the star athlete in the field, although he hadn’t raced for more than two years.

He led the race for the entire second half and bided his time until the final 200m to kick clear from relative unknown Tekalegn Kebelo to win by one second in 2:15:23, a respectable performance given the 1700m of altitude.

“It wasn’t the prize that brought me here, but Haile’s name,” said Shentema. “He is our inspiration. I’ve raced him many times [2006 Berlin Marathon and 2008 Dubai Marathon] and I came here for the honour of claiming the title of the first HGS winner.”

In the women’s race, the podium was filled by a trio of training partners. The first three athletes are all members of the Senbeta training group, training under Negash Dube.

Competing in just her second Marathon, Almaz Negede won in a time of 2:39:50 to get within two minutes of the 2:38:09 PB she set when winning the Bucharest Marathon last year.

Both winners received 100,000 birr ($5500) for their victories, the biggest ever prize for a road race in Ethiopia.

Among the foreign entrants, first across the line was USA’s Jason Doland who was awarded with the Mike Long Trophy, in memory of the elite athlete coordinator from Elite Racing, organisers of this race.

Speaking on behalf of Moray Mountain Sports, Rich Jayne said: “All our participants had a wonderful race experience, even those finishing in the heat of the day. They kept saying how friendly the people are here, and what amazing support was given by local spectators.”

Gebrselassie brought many of his close friends to the event including Gezahagne Abera, Belay Wolashe, and Gebremariam Gebregziabiher, and he expressed his delight both at the high number of foreign competitors and the support from locals in staging the race.

“Hawassa has today proved that it is the perfect venue for Marathons,” said Gebrselassie.

Jiro Mochizuki (organisers) for the IAAF 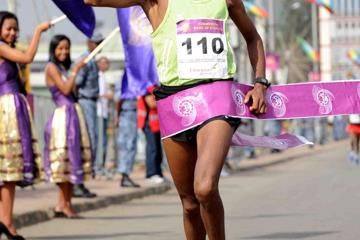