There is no place like home; ask Miguel Angel Lopez.

The Spaniard knows the streets of Murcia like the back of his hand, and on Sunday (17) he made them his own at the European Cup Race Walking, part of the IAAF Race Walking Challenge.

The home-grown favourite paced a scintillating men’s 20km race walk to get clear at 9km and then enjoy cheers, bravos and the rest of the race if not exactly in comfort, at least with a winning feeling. He crossed the line in 1:19:52, almost half a minute ahead of his nearest challenger.

Lopez has set his hearts on World Championship gold in Beijing to go with his European title, and believed he would be at the top of his game when he turns 27. He reaches that milestone in July.

If you tell yourself long enough you can do it, and couple it with hard miles, the sky’s the limit. Lopez not only wants to conquer the rest of the world at the end of August, he wants Olympic success as well.

Behind him, a fascinating battle for the places eventually saw 2010 World Cup winner Matej Toth claim silver with a tiring Yohann Diniz coming home for bronze.

The world record-holder for all of a week in March shot to the front, died a death, and then resurrected himself after Russia’s Aleksandr Ivanov was disqualified. The Frenchman passed Belarusian Dzianis Simanovich at 18km to get on the podium.

Incidentally, Lopez’s 1:19:52 matched his Spanish Championship win in February to the exact second.

Lopez was the only non-Russian winner across the three senior races on Sunday.

It bodes well for Eleonora Giorgi when she toes the line for the 20km race walk at the IAAF World Championships later this year.

With three competitions and three personal bests in a row for the Italian race walker after her latest success, it says much about her upward mobility.

She was edged out of gold by Russia’s European champion Elmira Alembekova, but took another chunk out of her PB after mounting a last-lap sprint that demanded something special to top it.

The world leader had that in her locker. Alembekova lit the afterburners for a final kilometre of 3:59, setting a competition record of 1:26:15, her fastest time outside of Russia.

Giorgi just avoided a collision as she threw herself across the line two seconds later to break her own Italian record with 1:26:17, also inside the previous competition record.

European under-23 champion Svetlana Vasilyeva of Russia finished third in 1:26:31, while world junior champion Anezka Drahotova set a Czech record of 1:26:53 in fourth.

There podium in the men’s 50km race walk also had two Russians and an Italian, albeit in a slightly different order.

Given his recent PB, it was not that great a surprise to see Italy’s Marco De Luca at the sharp end. The remarkable thing is how long it has taken the 34-year-old to reach the podium.

His legs, arms and torso sport almost as much medical tape as the Invisible Man, and De Luca threw off near anonymity to take on two top Russians and match them over the first 23km.

A forced pit stop in one of the course-side cubicles then saw the Italian lose a minute, but not third place.

In the end, it was World Cup champion and world silver medallist Mikhail Ryzhov who prevailed after breaking the ties to compatriot Ivan Noskov at 43km, who finished second.

It was Ryzhov’s misfortune to cross the finish line at exactly the same time as a group of female walkers as a result of overlapping races; his victory heralded as little fanfare as De Luca’s career up to this point.

Team gold went to Russia, Italy were second on countback, and yet again there was a team medal for Ukraine on the back of their World Cup success.

BACK
Pages related to this articleAthletes
Miguel Ángel LOPEZ 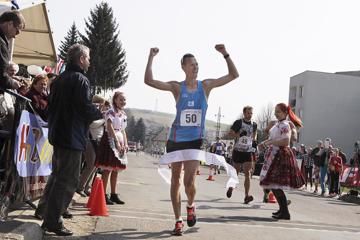 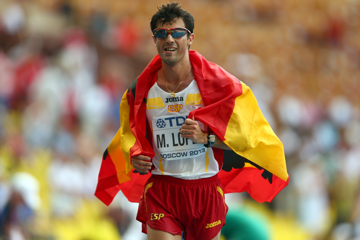 Nearing his peak, Lopez looks to produce his ...