Roaring success for Germans at European Team Championships in Brunswick

It was all cheers and celebrations for the host nation in the German ‘lion city’ of Brunswick on Sunday (22) as, for the first time since its inauguration in 2009, Germany took the European Team Championship title after years of Russian dominance.

Germany collected 371 points, while the Russians, who had won the event in the past three editions, had to settle for second in 359.5. The chase for the final spot on the podium was fierce between Poland, France, Ukraine and Great Britain, with France securing the hotly-contested third spot with 295 points.

Meanwhile Norway, Belarus and Finland will be moving up to the Superleague to compete in the event in Cheboksary in Russia next year.

Barely had the first athletes of the day been introduced to the crowd, that they were already treated to an outstanding home performance. Andreas Hofmann threw the javelin to an 86.13m personal best, leading the rest of the field by almost three metres.

The former European junior champion was surprised by his first-round effort: “I cannot believe it at the moment. I threw 86m in the first attempt.

“2014 is my year, my personal year after a lot of injuries. The audience pushed me so much. Now I want to continue the season in the same way and stay relaxed.”

Just a few metres away, his team-mate Christina Schwanitz was struggling at first to find her way into the competition with a first-round foul, but she eventually threw 19.43m to beat second-placed Irina Tarasova by more than a metre.

In the men’s 3000m, spurred on by the deafening cheers of his home crowd, Richard Ringer kicked with 200 metres to go, setting a championship record of 7:50.99, improving his personal best by two hundredths of a second.

However, the Russians did not make it easy with defending champion Sergey Shubenkov winning the men’s 110m hurdles in a championship record of 13.20 in a photo finish against Britain’s William Sharman.

“I am very pleased about the 12 points for the Russian team,” said Shubenkov, who finished just 0.01 ahead of Sharman. “This is the team championship, so the victory is the most important. Still, the result is pretty good. Despite the wind and a couple of mistakes, I managed to achieve a good time.

“Of course my main goal is the European Championships this year, so I would love to get in the best shape until then.”

His team-mate and world indoor high jump champion Mariya Kuchina collected another 12 points for the defending champions with 1.95m after retiring at 2.00m.

In the women’s sprint hurdles, Cindy Billaud of France took the 12 points in a championship record of 12.66 ahead of Nadine Hildebrand of Germany in a race that saw personal and season’s bests tumble.

And while the usual suspects were in true Eurovision Song Contest spirit collecting ‘douze points’ left right and centre, it was the debutants of the German team who played a vital part in securing the hosts the team title.

In the women’s long jump, 20-year old Malaika Mihambo continued her great shape as she soared to a personal best, championship record and European leading performance of 6.90m not once, but in two attempts.

In a tactical men’s 800m it was the sprint finish of Germany’s rising middle-distance talent Timo Benitz who caused an upset, beating the odds-on favourite Adam Kszczot with a 1:46.24 personal best.

“On the home straight I saw Kszczot and [Pierre-Ambroise] Bosse in front of me and thought ‘today is the day you can beat them’. I really hurt in the last metres, but it was awesome,” recalls the 22-year-old.

“For me it’s a special motivation when people like Robert Harting or Christian Reif tell me before the race ‘Boy, you can do this, go for it’.”

Harting and Heidler as dominant as ever

German team captain Robert Harting lived up to the expectations of the demanding home crowd with a solid victory over arch-rival Piotr Malachowski of Poland, 67.42m to 65.35m.

Betty Heidler, the world leader in the women’s hammer, cemented her authority with a winning throw of 74.63m. As was the case with Harting, all four of her attempts would have given her the victory.

In the women’s 1500m it was also the favourite who collected the 12 points as world champion Abeba Aregawi ran 4:14.20 helping the Swedes to battle against relegation, while Yoann Kowal of France set a start-to-finish-victory championship record of 8:25.50 in the men’s 3000m steeplechase.

World pole vault record holder Renaud Lavillenie collected 12 points for third-place finishers France as most of the rest of the field struggled with the difficult wind conditions in Brunswick’s Eintracht Stadium and had to settle for 5.62m.

The day was traditionally rounded off with the 4x400m relays which were won by Ukraine and Russia in the women’s and men’s event respectively.

Many of Brunswick’s top performers are now preparing to head to Zurich in August for the European Championships, which will be used to decide the European team that will contest the IAAF Continental Cup in Marrakesh, Morocco, on 13-14 September.

BACK
Pages related to this articleAthletes
Robert Harting 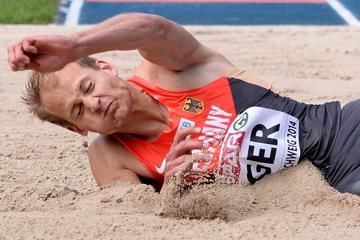 Germany hold narrow lead after day one of the...