The 2015 European Under-23 Championships in Tallinn ended in much the same way as it started, with Germany’s Rebekka Haase taking another gold medal as the event drew to a close on Sunday (12).

Following her 100m triumph on Friday, Haase led a German 1-2 in the women’s 200m on Saturday. The 22-year-old ran a great bend to just hold off younger team-mate Anna-Lena Freese down the home-straight, as the duo clocked 23.16 and 23.22.

On Sunday, the pair then teamed up with Alexandra Burghardt, who had finished second to Haase in the 100m, and lived up to expectations as the outstanding favourites in the 4x100m. The team duly won by seven metres in 43.47 as Haase became the first athlete in history to win three gold medals at the same European Under-23 Championships.

“I don’t even believe this, I won again,” Haase said after her 200m victory. “I came here with a bad feeling, because I lost here in Tallinn at the 2011 European Junior Championships.”

Haase was responsible for almost half of her country’s gold medal count as Germany topped the medals table with seven gold, four silver and five bronze.

Their most successful event was the women’s discus at the start of the final session of the championships, as Shanice Craft went one better than the silver she won in the shot put on Thursday.

A season's best of 63.83m with her final throw was enough to beat compatriot and pre-event favourite Anna Ruh by more than two metres, reversing the finishing order from two years ago, with fellow German Kristin Pudenz taking bronze.

It was Germany’s first ever medal sweep at the European Under-23 Championships and the first time in the history of the championships that all three medals in a field event had been won by the same country.

Christin Hussong continued Germany’s dominance of the throws. Any of her three valid efforts in the women’s javelin would have been enough to win, but her best came in the fourth round as she threw a championship record of 65.60m to win by exactly seven metres.

The eventual top two in the women’s long jump was a carbon copy of the results from the European Junior Championships two years ago. Germany’s Malaika Mihambo led from the outset with 6.73m, but the other podium places changed with regularity.

Britain’s Jazmin Sawyers produced a personal best of 6.71m in round five to move from fifth to second, overtaking Romania’s Alina Rotaru by two centimetres.

Two records and a gold for Zbaren

Just like Mihambo, Swiss sprint hurdler Noemi Zbaren followed up her 2013 European junior triumph with gold in Tallinn at the under-23 level.

After equalling the championship record with 12.88 in the semi-finals, she smashed that mark in the final with a lifetime best of 12.71, winning by two-and-a-half metres.

All three medallists in the men’s 400m hurdles produced lifetime bests, led by Poland’s Patryk Dobek who clocked 48.84 to take gold. Silver went to Jussi Kanervo in a personal best of 49.66, while Nicolai Hartling set a Danish national record of 50.02 to clinch bronze.

Russia's Dmitriy Chizhikov was the class of the triple jump field and his first-round leap of 17.05m was enough to win comfortably, while compatriot Ilya Ivanyuk cleared a PB of 2.30m to clinch gold in the men’s high jump.

Fellow Russian and world indoor champion Mariya Kuchina had been tipped to triumph in the women’s competition, but she uncharacteristically bowed out after three failures at 1.81m. Italy’s defending champion Alessia Trost eventually prevailed with a first-time clearance at 1.90m as silver went to heptathlete Nafissatou Thiam of Belgium with 1.87m.

Gold for Braun and bronze for hosts

But it wasn’t until the discus (42.69m) when he overhauled overnight leader Yevgeniy Likhanov. The Dutchman went on to clear a 4.90m PB in the pole vault, produce a season’s best in the javelin (58.55m) and finish second in the 1500m (4:36.19) to wrap up the title. Spain’s Jorge Urena took silver, while Janek Oiglane gave the crowd something to cheer about as he took bronze, Estonia’s only medal of the championships.

Amela Terzic has won European titles on the track and cross country over the past few years and she lined up as defending champion in the 1500m. In then end, though, it took a Serbian and championship record of 4:04.77 for her to edge out Sofia Ennaoui who also set a PB of 4:04.90.

Poland’s Kacper Oleszczuk produced one of the biggest surprises of the championships to win the men’s javelin. The 21-year-old added almost five metres to his PB to win with 82.29m.

Kaya does the double

Turkey added to their medal tally in the women’s 3000m steeplechase as Tugba Guvenc put in a brilliant front-running display to pull away from Maeva Danois of France with 500m to go. With 300m remaining, Guvenc hit a barrier with her trail leg, but she managed to scoop herself off the track just as quickly as she had fallen and sprint to a 9:36.14 championship record.

The men's 200m looked like it was going to be a two-horse race, after impressive performances from Karol Zalewski and Leon Reid in the previous two rounds. In the end it was defending champion Zalewski who prevailed in 20.49, with European junior silver medallist Reid clinching silver.

A sharp performance by Bianca Razor saw her reign supreme in the women's 400m final, just as she had done on the same track in 2011 when winning the European junior title.

With five athletes in a line coming off the final bend, the Romanian judged her race the best, moving away in the final 50 metres to equal the 51.31 PB she had set in the heats two days earlier.

The two athletes who had finished behind Razor in the heats once again took second and third, albeit in the reverse order. Russia’s Yekaterina Renzhina took silver in a personal best of 51.51 from lane one, while Poland’s Patrycja Wyciszkiewicz took bronze.

Interestingly, the same trio took the medals at the 2013 European Junior Championships with Wyciszkiewicz winning gold on that occasion.

After equalling his personal best to qualify for the men’s 400m final, Thomas Jordier did it again, running an outright PB of 45.50 to take gold. The battle for silver was a good one, with a photo-finish needed to separate Pavel Ivashko and Luka Janezic, who both ran 45.73.

It was one of six gold medals won by France on the last two days of the championships, having not won any titles on the first three days.

France's Alexandria Tavernier won the women’s hammer. In the final she was unable to match the championship record of 72.98m she had set in qualifying, but she led for the duration, opening with 71.68m and ending with 72.50m to finish more than a metre ahead of Alena Sobaleva of Belarus.

There was further French success in the women's 800m as Renelle Lamote judged her race to perfection to pass long-time leader Anastasiya Tkachuck in the final 30 metres. Coming off the bend it look like gold would be Ukraine’s as there was daylight between the pair, but Lamote finished strongest to stop the clock at 2:00.19. With a late charge, Germany’s Christina Hering took bronze with a PB of 2.00.88.

Like all of the women's distance events at these championships, it took record-breaking performances to get among the medals in the 5000m. Forcing the pace all the way, France's Liv Westphal was rewarded with gold as she crossed the line in 15:30.61 ahead of Belgium’s Louise Carton and Viktoriya Kalyuzhna who clocked 15:32.75 and 15:38.38 respectively with all three medallists setting national under-23 records.

France was victorious in both the men’s 4x100m and 4x400m, adding two more gold medals to their count at the end of the final day.

Britain triumphed in the women’s 4x400m, adding to the gold medals won earlier in the championships by Nick Miller in the hammer and David Omoregie in the 110m hurdles, the latter clocking 13.63 to win by a clear margin.

BACK
Pages related to this articleAthletes
Christin HUSSONG 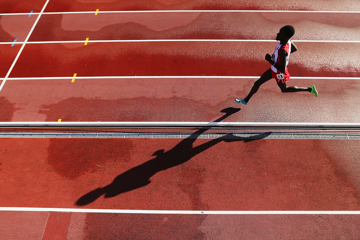 Kaya and Krizsan among early winners at Europ...