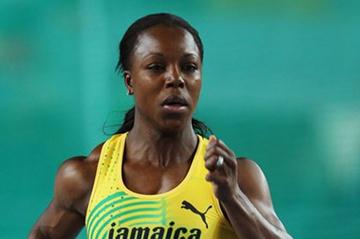 Defending champion Veronica Campbell-Brown (JAM) advanced safely to the final of the women’s 60 metres with a powerful finish to win the first of three semi-finals in 7.12 seconds.

Disaster struck LaVerne Jones-Ferrette (ISV) in the second semi-final, however, the second-fastest woman in the world this year being disqualified for a false start.

Murielle Ahoure of the Ivory Coast won that semi-final and Chandra Sturrup of the Bahamas, at 40, the oldest female competitor in Istanbul 2012 and a former champion at 60 metres, won the third.

Campbell-Brown, in lane six, had the slowest reaction time in the first semi-final by some margin, and was no better than fourth at half-way. Once she hit overdrive, however, it was all over.

Campbell-Brown took the win in 7.12, with Barbara Pierre (USA) edging the fast starting Gloria Asumnu (NGR) for the second automatic qualifying spot, 7.19 to 7.20.

Asmunu and 2011 World Youth champion at 100 metres, Asha Philip (GBR), who was fourth in 7.24, had to wait on the other semis to see if either or both went through. Ultimately, Asumnu did, but Philip missed out when Jamaica’s Aleen Bailey ran 7.23 for third in the final heat.

The fastest woman in the world this year, Tianna Madison (USA), qualified in the second semi-final when it got away on the second attempt, but she was clearly beaten by Ahoure, 7.13 to 7.17. To add to the drama around this race, Ahoure stumbled and fell going up the banked track after the finish, but was quickly on her feet and appeared to sustain no injury.

Whatever age may have taken from Sturrup, it is clearly not her start. The veteran was first out of the blocks and held off Bulgaria’s Ivet Lalova all the way to take the third semi in 7.21. Bailey flashed home in the outside lane and shared the same time as Lalova, 7.23, but the Bulgarian was given the all-important second place.