Great Britain’s double London 2012 Olympic Games champion Mo Farah immediately turned his thoughts to his “first big test of the summer” at the IAAF Diamond League meeting in Eugene on Friday after securing his fifth consecutive Bupa London 10,000 title in the British capital on Monday morning (27).

Farah was in imperious form as he raced away in the British capital from the domestic field on a looping course around central London and won by nearly a minute in 29:13.

His time was eight seconds quicker than he ran here last year, but some way adrift of the British record of 27:44 he set in 2010.

Nevertheless, it was a solid foundation, he said, for the challenges that lie ahead this summer.

The first will be a 10000m track race in Eugene against a field packed with the top Ethiopians and, later this summer, he will bid to repeat his Olympic 5000m and 10000m double at the IAAF World Championships in Moscow.

“It was most important to win the race today, I wasn’t really looking for a time,” said Farah.

“Running in London is fun for me because I don’t often race at home, but it’s going to get serious from here. I’ve got my first real test next Friday at the Eugene Diamond League and I’m very excited about that. I’ve got to be ready for it. I’ve got to be more ready than I was last year.

“I’ve got great memories of running in Eugene,” added Farah, who set the current European 10000m record there two years ago when he won in 26:46.57.

“I always like to run there and this will be no different. I don’t think anyone’s missing.”

Farah stamped his authority on his first race in his home city since he won the second of his Olympic titles, over 5000m, last summer and was running alone for nearly eight kilometres to win by 52 seconds from British international Phil Wicks, who was second in 30:05.

His comfortable victory extended an unbeaten run in outdoor races that goes back to the 2011 World Championships 10000m final in Daegu when he lost a sprint finish to Ethiopia’s Ibrahim Jeilan.

There was little chance of that happening here.

Farah set off to a loud roar alongside British international marathon runner Scott Overall, with Wicks tucked in behind. These three went through 2km in 5:49 before Farah decided the pace was too slow.

Simply lengthening his stride, he opened an instant five-metre lead that grew to 20 metres by 3km. He passed half way in 14:40 with a nine-second advantage, and from then on it there it was just a question about how fats his winning time would be.

Farah appeared to be enjoying every minute of his outing.

He raced back towards Westminster along Victoria Embankment swapping hand-slaps and high fives with the mass of runners jogging in the opposite direction along the other side of the carriageway. Many stopped to take photos and do ‘The Mobot’, Farah’s signature victory gesture.

“It was awesome out there today,” said Farah, after sprinting home down The Mall.

“The support was great and it’s nice to give something back to the British people. It was great to win my fifth (London 10,000) title, but now I’m looking forward.”

Like Farah, Wootton led from the 2km mark, and stretched her lead over the rest of the course to claim victory in 32:37, just 14 seconds outside the personal best she set four weeks ago. Twell clocked 33:34 in second place.

“I haven’t run in London since I did the London Mini Marathon as a school girl,” said Wootton. “I wanted to experience the London crowds and they really didn’t disappoint today.

“It was amazing to be so far out in the lead, although I was worried about the quality field behind me. The Olympics created such a buzz for London so I wanted to come here and experience that.” 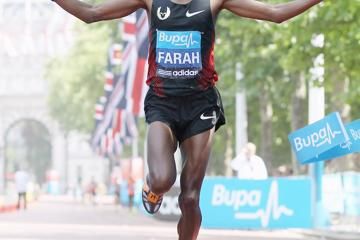