Silas Kiplagat and Musaeb Balla posted quick times in the middle-distance events, while Anita Wlodarczyk and Sally Pearson broke meeting records at the IAAF World Challenge meeting in Rieti on a highly entertaining afternoon of athletics on Sunday (8).

Rieti staged the final leg of the IAAF Hammer Throw Challenge for both men and women. A qualifying round was held on Saturday afternoon to determine the best four best throwers in both categories.

Anita Wlodarczyk, silver medallist at the World Championships in Moscow, clinched the win in Rieti with a meeting record of 76.57m to secure the win in the IAAF Hammer Throw Challenge. The Polish star backed up her winning mark with two more throws over 75 metres (75.07m and 75.14m). Olympic and World champion Tatyana Lysenko had to settle with runner-up place with 73.90m.

Hungary’s Olympic champion Krisztian Pars, who set the best qualifying mark of 78.17m, won the men’s Hammer with 79.80m in the third round, beating World champion Pawel Fajdek who produced a best throw of 76.29m in the fourth and last attempt after three fouls to finish ahead of veterans Szymon Ziolkowski (75.30m) and Nicola Vizzoni (74.50m).

Despite this defeat, Fajdek clinched first place in the Hammer Throw Challenge with 246.23m ahead of Pars (264.17m).

Kiplagat makes up for Moscow disappointment with 3:30 in 1500m

The magic blue track of the Raul Guidobaldi lived up to its reputation as the temple of middle-distance running produced fast times on a sunny and warm afternoon of outstanding performances.

Silas Kiplagat, sixth at the World Championships in the 1500m in Moscow, backed up his post-championships good form, clinching his second consecutive win after Zurich.

Johan Cronje, World bronze medallist in Moscow, set a South African record of 3:31.93 in second place as the top nine runners all clocked a seasonal or a personal best. Mohamed Moustaoui from Morocco set a season’s best of 3:32.08 in third to finish ahead of Nick Willis who also lowered his 2013 best with 3:32.57.

“In Moscow I was not in good shape,” said Kiplagat. “I felt very weak and the weather was too hot. I wanted to win and set a fast time. Winning in Rieti for the second consecutive year was very special.”

The fast pace was set by 2011 World youth champion Leonard Kosencha who went through 400m in 49.08. USA’s former 400m hurdler Brandon Johnson took the lead at 500m after Kosencha dropped out, then passed 600m in 1:16.56 before Balla took the lead coming off the bend.

Balla ran a great final straight to take the win ahead of World Junior bronze medallist Edwin Melly, who set a season’s best of 1:44.49 to hold off Johnson by 0.06. Ireland’s Mark English dipped under 1:45 for the second time in his career with 1:44.89.

South Africa’s Caster Semenya, World champion in 2009 and Olympic silver medallist in London last year, returned to sub-two-minute form to clinch the win in the women’s 800m with a season’s best of 1:58.92.

World 5000m silver medallist Mercy Cherono also impressed by winning the women’s 3000m in a solid 8:35.97 in a race where eight athletes set personal bests. Sylvia Kibet, World silver medallist in the 5000m in Berlin and Daegu, ran the fastest time of her career with 8:37.47 to beat compatriot Agnes Tirop (8:39.13) and Netherlands’ World finalist Susan Kuijken who dipped under 8:40 with a life-time best of 8:39.65.

Edwin Soi, Olympic bronze medallist in 2008 and fifth at the World Championships in Moscow, narrowly edged USA’s Ben True by just 0.06 in the men’s 3000m, winning in 7:36.53 as True smashed his PB by almost eight seconds.

Three men – Soi, True and 1500m specialist Caleb Ndiku – broke away with 600m to go. Soi and True launched their kick with one lap to go, opening a gap on Ndiku who was eventually overtaken by Cyrus Rutto who was rewarded by a career best of 7:37:57.

Meeting records from Pearson and Perkovic

“The meeting record confirmed that I’m still in good shape,” said Pearson. “I’m happy with the season. The silver medal was not what I wanted but I’m happy considering the injury. It was very special to run in Rieti. I enjoyed the weather and the atmosphere of this meeting.”

Croatian superstar Sandra Perkovic, reigning Olympic, World and European Discus champion, set a meeting record of 66.12m on her fourth attempt to cap another great season in which she won her first World title, the Diamond Race and lost only once.

The women’s Discus was one of the best events of the meeting as it featured the entire Moscow podium, but it was Zaneta Glanc from Poland who took second place with 62.24m ahead of World bronze medallist Yarelys Barrios (61.98m) and France’s Melina Robert Michon (61.62m).

US sprinter Walter Dix, double Olympic bronze medallist in 2008 and double World silver medallist in 2011, returned to sub-10 territory. He clocked 9.99 to win the men’s 100m to back up his recent 20.12 200m performance in Brussels.

Stephanie McPherson from Jamaica, fourth at the World Championships, missed her PB by 0.08 to win the 400m in 50.00, beating compatriot Kaliese Spencer who set a personal best of 50.19.

Carrie Russell scored another Jamaican sprint win, taking victory in the 200m in 22.62 to set her third PB of the season in this event with her best before this year being 23.86.

Jamaican Rusheen McDonald, World 4x400m silver medallist in Moscow, set a meeting record in the 300m with a world-leading 31.97. The race commemorated late Italian sprint legend Pietro Mennea, who competed eleven times in Rieti and set a 300m world best of 32.28 in 1979 on this track.

McDonald was awarded by Tommie Smith, 1968 Olympic 200m champion and former World record-holder, who was the special guest of the Rieti meeting together with another athletics legend Alberto Juantorena, Olympic 400m and 800m champion in 1976.

European bronze medallist Irina Gordeeva upset Olympic champion Anna Chicherova in the women’s High Jump. The Russian had a clean sheet up to 1.99m while Chicherova needed two attempts to clear the routine height of 1.85m and jumped 1.96 at the second time of asking. 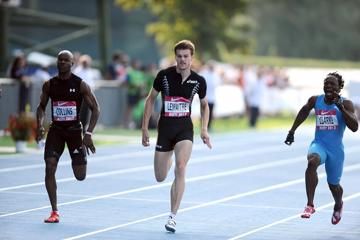 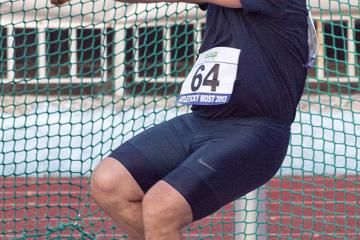 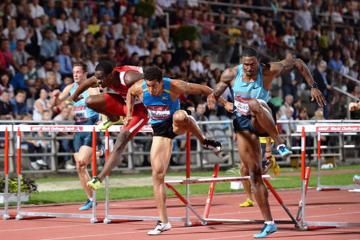