The 10km race held in early evening was run over a 1km circuit in the centre of the picturesque north eastern Italian town.

The race got off to a conservative start over the first four laps as Italian runners Giovanni Gualdi and Stefano La Rosa took the early initiative together with 59:20 half marathon performer Simon Cheprot and Walter Kororia. But the race really got going when six African runners – Cheprot, Kororia, Kiprop, Soi, Merga and Thomas Longosiwa – pulled away from the rest of the field.

Three men – Kiprop, Soi and Merga – remained in the lead, fighting it out for the win. Kiprop pushed the pace on the penultimate lap and after the bell he stayed in front for most of the last lap, while Soi waited for the final sprint.

The race came down to a breath-taking battle in the final sprint. In the closing metres Soi edged Kiprop by the narrowest of margins with both runners sharing the time of 29:01.

“Today I proved that I am the strongest runner," said Soi. "Winning this race for the fifth time gives me a great feeling. I feel at home when I run in Trento, although it was not easy to win against strong rivals.

"It was important not to be dropped as I knew that I had good chances to win in the final sprint. I had a good season in which I broke my personal best in the 5000m. I am now planning to prepare for the World Indoor Championships in Sopot."

Kiprop ran his second race in six days after winning the Half Marathon in Lisbon in 1:00:18. "The only way to beat Soi was to try to break away from him," said Kiprop, whose main goal for next year will be to regain his title at the IAAF World Half Marathon Championships.

"Unfortunately I couldn’t beat him. I recovered well from Lisbon. My body responded well today. Everything was perfect. The race was well organised. I felt in good shape."

Merga, who also ran the Half Marathon of Portugal in Lisbon last week, had to settle for third place in 29:03. “I was not in good shape," said Merga. "I felt tired after Lisbon. I tried to force the pace in the final laps but my rivals were stronger. On this course Soi is unbeatable."

Cheprot held off Longosiwa by three seconds in 29:20. One week after finishing runner-up at the Lisbon Marathon in 2:11:24, nine-time European cross-country champion Sergiy Lebid finished seventh in 29:29, four seconds behind Kororia.

BACK
Pages related to this articleAthletes
Edwin Cheruiyot Soi 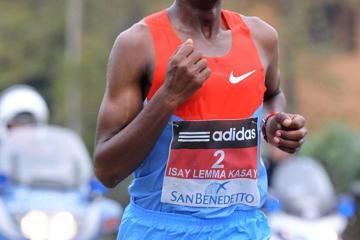