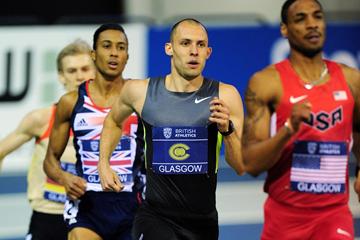 World 400m hurdles champion Dai Greene believes he is on track to retain his title in Moscow this summer after the British athlete opened his 2013 season with his first UK record at the British Athletics Glasgow International on Saturday (26).

The Welshman, who came fourth at last summer’s Olympic Games after nearly a year disrupted by injury, looked like his old self while competing over the rarely run 600m.

His time of 1:16.22 was still only good enough for second place behind the USA’s Duane Solomon, who clocked a US record of 1:15.70, but it did erase Ikem Billy’s 28-year-old mark from the domestic record books.

More importantly for the Welshman, it was a positive sign after his disappointments of 2012.

“It’s nice to be enjoying athletics again without any stress, any niggles, enjoying the race day again without worrying if the body’s going to hold up," said Greene. "I can just focus on being as competitive as possible.

“You want to be back to the best you think you can be at. I know when I’m at my best I’m competing with the top guys. So it’s reassuring to be going up against the likes of Andrew Osagie and Duane and being competitive. It’s back to how I should be running.”

Solomon, who also just missed out on a medal in London when finishing fourth in the 800m, took 0.1 off Chip Jenkins’ 26-year-old US record with the sixth-best outing ever.

Russia gets to raise its flag

Russia took the overall victory in the five-team event, edging out the USA on the basis of more events being won after both nations ended on 58 points. Great Britain finished third with 50.

The Russians won five events overall with a late victory in the 400m by Pavel Trenikin swinging the meeting in their favour. However, his personal best of 46.30 was slightly overshadowed by the return of Manteo Mitchell, with the latter savouring his comeback after famously suffering a fracture of his left fibula during the heat of the Olympic Games 4x400m relay but still heroically getting the baton round.

Despite coming fifth, the US sprinter was delighted to be back in international action. “My coach wanted me to break 48," said Mitchell. "I did 48.17, so that’s pretty good.

“London took care of me while I was here. I even did some of my rehab here. So they helped me out, but I’ve been given a platform where I can inspire other people with my courage. It’s been a blessing for me. I’ve done a lot of cool things since it happened. We had a visit to the White House with all the Olympic and Paralympic teams. President Obama called me out in his speech so I was like: ‘I’m now friends with the president.’"

World 100m champion Carmelita Jeter was thwarted over 60m by Germany’s Verena Sailer, who delivered a blistering world-leading run of 7.16.

“It was a very good race and I felt really good out there,” said the German. “It gives me great confidence going into the season. My preparation was very good. I’ve stayed very healthy which is why I’m in very good shape right now. I don’t think it was Carmelita’s best race, but I am really happy with the victory.”

There was also a promising start to 2013 for the US 400m runner Natasha Hastings who ran a world-leading 52.11 to hold off Britain’s Perri Shakes-Drayton in the 400m.

Another home favourite Holly Bleasdale produced a best of 4.60m to take the pole vault.

Further world-leading marks fell to Kenya’s Bethwell Birgen, who won the 1500m in 3:38.37, and Russia’s European champion Sergey Shubenkov, who took the 60m hurdles in 7.62.

US evergreen middle-distance runner Bernard Lagat underlined he is not yet ready to retire with a victorious run of 7:53.36 in the 3000m, holding off Kenya’s Augustine Choge in a sprint for the line.

The 38-year-old admits he has not ruled out continuing to the 2016 Olympics Games. “I’m going to take it one year at a time,” he said. “But if all goes well, why not see me in Rio?”

Britain’s world indoor triple jump champion Yamile Aldama saw a slight hamstring injury hamper her hopes of success and she finished fifth. “I didn't want to push it today because I didn't want to get hurt,” said the 40-year-old, who could only jump a modest 13.16m. “I couldn't run 100% and I jumped with a shorter approach.” German’s Jenny Elbe won with 13.90m.