Olympic and world indoor champion Brittney Reese produced her best outdoor leap for more than three years when winning with 7.04m at the Gala dei Castelli in Bellinzona on Monday (6).

The three-time world champion twice achieved that mark, leaping 7.04m in both the second and third rounds, just missing Inessa Kravets’ stadium record by one centimetre. She ended her series with an effort of 6.91m.

Britain’s Jazmin Sawyers, competing in her first outdoor competition of the year, finished second with 6.62m.

“I am very pleased,” said Reese, who owns seven global long jump titles. “This was the first meeting where I found good weather conditions with no rain. Sometimes the smaller meetings with a great crowd involvement are the best venues. This year I want to jump 7.30m and win my second Olympic gold.”

The biggest cheers of the night, though, came in the men’s 400m hurdles as Switzerland’s Kariem Hussein won in a season’s best of 48.98. And as was the case at the 2014 European Championships, Estonia’s Rasmus Magi finished second, stopping the clock at 49.69.

“It was very nice to win for the second consecutive year in front of my home fans here in Bellinzona,” said Hussein. “This win gives me a lot of confidence ahead of Amsterdam and Rio de Janeiro.”

Kristi Castlin followed up her third-place finish at the IAAF Diamond League meeting in Birmingham with a win in the 100m hurdles in 12.75 (-0.2m/s) ahead of Olympic long jump bronze medallist Janay De Loach (12.89).

The men’s 110m hurdles was one of the closest events of the night as just 0.07 separated the six finalists. Germany’s Alexander John came out on top, equalling his personal best of 13.35, while Milan Ristic broke his own Serbian record with 13.37 in second place.

The third German victory of the evening was achieved in the men’s javelin. Lars Hamann came within two metres of his recent PB to win with 83.95m. Sweden’s Kim Amb was second with 82.67m.

World silver medallist and European champion Adam Kszczot won the men’s 800m in 1:45.77 ahead of 2011 world youth champion Leonard Kirwa Kosencha, whose time of 1:46.24 was his best since September 2012. 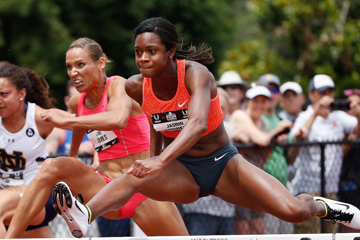 Stowers, Kohlmann and Ash among the meeting r...

Rebuilt Reese back on top of the podium...