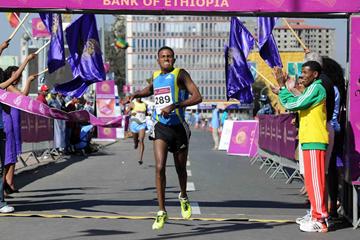 The annual 10km race, which doubles as a running festival that brings together Ethiopia’s best traditions in long distance running with the country’s unique cultural celebrations, usually serves as an opportunity for Ethiopia’s young and upcoming runners to showcase their early promise before moving on to an international running career. This year’s race winner Hagos Gebrhiwet, however, is by no means a newcomer to the international track scene.

The 19-year-old smashed the World junior 5000m record during his impressive second place at the Paris Samsung Diamond League fixture in July, just one month before reaching the Olympic final in the same event.

His international road running record is also equally promising with victory in the 2011 Sao Silvestre de Vallecano 10km in Madrid and a third place finish in the Carlsbad 5000 in April earlier this year.

But this was no easy task for Gebrhiwet who had to battle long and hard with Berhanu Legesse and Belete Assefa before clinching his first ever victory in this race.

There was nothing to separate the main group of elite runners in a slow start to the race with Gadisa Berhanu heading a large leading pack of 15 runners through the first half.

The young runner tried to make an audacious break at the 6.5km mark, but the move was covered quickly. His move only succeeded in dropping nearly ten runners leaving only six remaining in the final hunt for top places at the 7km mark.

Pre-race favorite Gebrhiwet had looked comfortable until this point, but started to show unexpected signs of frailty by dropping back from the leading pack. His move, perhaps mistakenly interpreted by his challengers as a tactical one, succeeded in slowing down the field eventually allowing the 18-year old to return back to contention.

The head of pack, now lead by Berhanu Legesse with Belete Assefa and World junior 10,000m champion Yegerem Demelash in close contention, regained its shape despite Gebrhiwet’s struggles, but it was not long before an increasingly-fierce pace in the lead up to the 8th kilometre claiming Demelash who became the first to drop from the lead pack of six.

Assefa and Legesse then started exchanging the lead for the next kilometre without making any serious attempt to force a breakaway from their challengers. This further allowed Gebrhiwet to fully recover from his earlier frailties. But as the duo traced each other’s move, Gebrhiwet took his place at the head of the pack at 9km before making pulling further away toward the finish line and take victory in 28:37. Legesse eventually overtook Assefa in the battle for second to cross the line in 28:41, four seconds ahead his challenger.

"I opted to stay behind because the race and the weather was a bit tough, but I regained my energy after 9 kilometres and was able to win it,” Gebrhiwet said. “I am so happy to achieve this success."

A delighted Legesse, winner of the Coca Cola Series of domestic 7km and 5km races in October this year, added, “This was my debut in the Great Ethiopian Run 10km race. The result was a good one for me."

Dominant Kebede holds on for victory

The women’s race had a similar finish to the men’s with Aberu Kebede, winner of the 2012 Berlin Marathon, overcoming the challenge of up comer Tsegereda Girma and Olympic 10,000m finalist Belaynesh Oljira for a closely-fought victory.

A slow start saw a leading pack of 20 athletes emerge at the 4km point with Meseret Legesse leading the away. At the halfway point, covered in 16.18, the pack was down to 15 athletes with Kebede taking the lead followed in close contention by a group containing 2008 world junior 5000m champion Sule Utura, Girma, and Oljira.

After the 7km mark (23:06), Kebede made the first of two breakaway attempts, but Girma stormed away from her comfortable position in the middle of the pack to cover her move. The moments of jostling and increased pace further reduced the pack to just six athletes with only Oljira, Werknesh Shashe, and Rutti Aga the other runners to follow close behind.

Girma then went ahead in another bid to shake up the group. This time, she succeeded in dropping a waning Utura. A look up to the heavens by Aga and visible plea to her creator was perhaps an apt sign of the quickening pace which continued at searing levels as the leaders made their way to the 9km mark, but only Girma and Oljira were toeing closely with Kebede as Aga’s and Shashe’s challenge ebbed away.

With 600 metres to go, Kebede opened up a 10-metre gap with Girma and Oljira, but while Girma responded by quickly drawing level with Kebede, Oljira’s challenge started to fade. Kebede kicked again with 300 metres of the race left to stop the clock at 33:27 with Girma (33:30) and Oljira (33:33) finishing second and third respectively.

"Tsegereda [Girma] and Belaynesh [Oljira] are very strong athletes,” said Kebede. “I was a bit scared of losing today's race because for a long time I was training for the Marathon. But finally, I managed to win this big race."