Just two days after smashing the world indoor mile record in Stockholm, Genzebe Dibaba was back in action on Friday (20), this time over 3000m at the Catalan Centenary Meeting in the Spanish city of Sabadell.

Her appearance hadn’t been specifically billed as a world record attempt, but whenever the IAAF world athlete of the year lines up for a race, it’s clear that the pace will be fast.

Dibaba was lining up alongside fellow Ethiopian Gelete Burka, who was a world indoor 1500m champion back in 2008, so she also knew it wouldn’t completely be a solo effort.

The pair had already caught the pacemaker when she dropped out at 800m, having covered the first four laps in about 2:15.5. Dibaba led through 1000m in 2:49.27 before Burka took up the pace for a lap.

Burka’s lead didn’t last long, though, and Dibaba was back in front at half way, which was reached in about 4:12. She then started to open a gap on her compatriot, stretching it with each of her metronomic 33.5-second laps.

The 2000m mark was reached in about 5:38 and a couple of minutes later Dibaba hit the bell with the clock reading 7:51. A final circuit of 31 seconds brought Dibaba home in 8:22.50, the second-fastest indoor clocking in history behind her own world indoor record of 8:16.60.

There were additional Ethiopian victories in the other distance events.

Spanish record-holder Kevin Lopez was a convincing winner of the 800m in 1:46.26, while Kenya’s Boniface Mweresa took a surprising victory in the 400m in a PB of 46.46.

World leader Yulimar Rojas opened her triple jump series with five fouls, but pulled out a 14.35m leap on her sixth attempt to salvage the win.

Spanish shot putter Carlos Tobalina was the other stand-out performer in the field events. The 30-year-old set an outright PB of 20.42m in round three and then equalled it in round five to win the competition by nearly two metres. 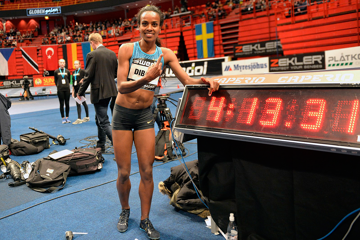 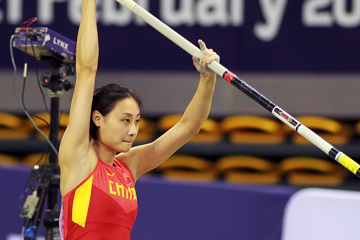