Shume Hailu and Geda Ayelu Lemma made it a double Ethiopian win at the 20th edition of the ACEA Maratona di Roma, an IAAF Gold Label Road Race, on Sunday (23).

The men’s race set off at a conservative pace of 15:37 at 5 km due to the difficult conditions but the leading group, which featured nine runners, increased the pace and 10km was reached in 30:21.

The halfway mark which was reached in 1:04:25 while the leading group had been reduced to six men - Hailu, Jisa, Langat, Effa, Kotut and Kibor - at 30 km.

Just before the 35km, Hailu, Jisa and Langat broke away from Kotut and Effa, with Kibor having already drifted off the back of the pack

The two Ethiopians left Langat behind at 37km and then Hailu unleashed his decisive kick at 38 km and finished strongly despite the conditions to become the seventh Ethiopian runner to win Rome Marathon title in the 20th anniversary of the event, finishing 2:30 outside the course record of 2:07:17 set by Kenya’s Benjamin Kiptoo set in 2009.

Although the race only started in 1982, and was not held in the years between 1992 and 1994, Ethiopian runners and marathons in the Italian capital have been inexorably linked since Abebe Bikila won at the 1960 Olympic Games in Rome.

Jisa came second in 2:11:20, a long way adrift of his 2:06:27 personal best set in Paris two years ago but fast times in these conditions were quite impossible.

“I wanted to run my personal best but the course was too slippery”, said Hailu, who hails from a small village about 25km from Addis Abeba.

Hailu is trained by Haiji Adilo, who coaches many well-known Ethiopian athletes including Firehiwot Dado, who won the women’s race three times in the Eternal City and went on to take the honours in New York.

Adilo also coaches runners-up Jisa who was a handball player at school before starting his running career in 2002 at the age of 19. He acted as a pacemaker last September in Berlin when Wilson Kipsang set the world record of 2:03.23.

Lemma won the women’s race from gun-to-tape taking a 50-second lead in the first five kilometres, with Russia’s Albina Mayorova, Ukraine’s Olena Shurkhno and Italy’s Emma Quaglia leading the women behind her.

The Ethiopian increased her lead to three minutes and clocked a quick 1:13:31 at the halfway mark but her paced slowed down dramatically in the second half as she took 1:21 from 21 to 42 km to cross the finish line in 2:34:49.

Morocco’s Janat Hanane  was second with 2:38:08 while Quaglia, sixth at the IAAF World Championships in Moscow last summer, had problems from the outset but came home third in 2:43:24. 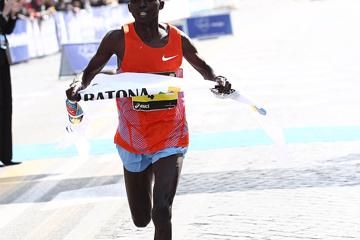 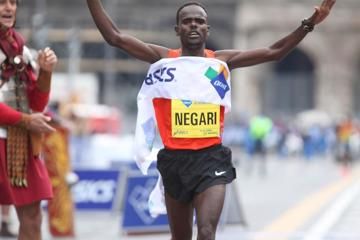