Battling against warm and humid conditions, Meseret Hailu led Ethiopia to an upset victory in the team race with her surprise triumph at the 20th edition of the World Half Marathon Championships in Kavarna, Bulgaria.

Temperatures along the sunny course that wound through this Black Sea coastal city of 12,000 rose to 30 C (86 F) during the morning’s first race, but that didn’t seem to faze the unheralded 22-year-old Hailu, who crossed the line in 1:08:55, a performance that sliced more than two minutes from her previous personal best.

"I am very happy for me and my country," said Hailu, whose best previous outing came with her third place finish at the Prague Marathon in May where she clocked a relatively modest 2:27:15. "It was a very hard race, the temperatures were very hot."

Hers was the first Ethiopian win at these championships since Berhane Adere’s victory in 2002 and only the second ever. Not too shabby for Hailu, who was competing in her first World Championship event.

It was also the closest race ever at these Championships, with her victory not secured until she passed Feyse Tadese in the race’s final 15 metres to win by less than a second. The pair, who produced the first-ever 1-2 finish for Ethiopia, weren’t on paper nearly as impressive as the daunting squad Kenya sent to Kavarna, but those stats and figures meant little soon after the race got underway.

Warming up to the upbeat heavy metal sounds of AC/DC and Ronnie James Dio – Kavarna is known as Bulgaria’s hard rock music capital - the Kenyans were cool and confident as the gun sounded, but it didn't take long to see that they’d have company throughout the race.

Well before the first five kilometres, there was already a breakaway pack of six with three Kenyans - Paskalia Chepkorir Kipkoech, Lydia Cheromei and Pauline Kahenya - and a trio of Ethiopians – Tadese, Hailu and Emebt Etea – reaching the first five-kilometre marker in 16:13. Kenyan Priscah Cherono, Derba Godana of Ethiopia and Japan’s Tomomi Tanaka were already 12 second back, with Shalane Flanagan of the U.S. struggling early, rounding out the first ten another second back. She would fade badly in the second half and eventually finish 24th.

Little changed by 10 kilometres (32:21), with Kahenya and Hailu sitting back in the leading quartet’s shadow just a second behind. At this point, the leading half dozen were already nearly a minute ahead of the rest of the pack.

The first to be dropped was Kahenya, who was left behind in the 42nd minute. Next to go was Etea, who was struggling to maintain contact before falling five seconds behind at 15 kilometres.

The scene was the same with one hour on the clock as Tadese and Kipkoech ran stride-for-stride at the head, with no one surrendering an inch of ground.

Just beyond the 20-k point, Cheromei began to drift back, leaving Kipkoech alone to tussle with the Ethiopians. That battle didn’t last long as the pair pushed away just before the final turn into the city's main square. At that point it looked as though gold was Tedese’s but Hailu was not about to give up. A thrilling sprint ensued with Hailu not securing a decisive advantage until just 10 metres remained.

"I expected to run well but the race was very hard," said Hailu, who comes from the same region that was home to Haile Gebrselassie.

Although she’s just 22, Hailu, who trains in the same group as Olympic champion and 2012 London Marathon winner Tiki Gelana, has already contested seven marathons, and intends to keep road racing as her primary focus. Her next appearance will come in just two weeks when she’ll be contesting the Amsterdam Marathon for which she confirmed a rather modest goal of 2:25.

Tadese’s 1:08:56 for silver was a season’s best, and a satisfactory improvement over her fourth place finish at this event in Nanning, China, two years ago.

"Meseret had better legs at the end, but I am very happy with the silve medal," said Tadese, who illustrated some strong cross border good will when sharing a water bottle with Lydia Cheromei in the seventh kilometre.

Japan, paced by Tomomi Tanaka’s eight place finish, took team bronze for the sixth time in the past seven championships.

Elvan Abeylegesse of Turkey, who was expected to make her return to international competition following maternity leave, suffered a minor injury the day before her departure for Kavarna, and was forced to the sidelines. 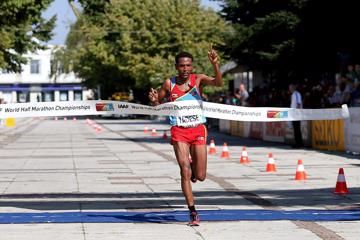