April gets record third win at the Hannover Marathon

South Africa’s Lusapho April got a record third win at the HAJ Hannover Marathon, an IAAF Silver Label Road Race, when he crossed the line in 2:11:27 on Sunday (10).

April followed up his wins in 2011 and 2013 and although he wasn’t able to approach his own course record of 2:08:32 from three years ago, his last win anywhere over the classic distance, he was still delighted with the memorable victory.

"Even if the race did not go as I expected, I'm proud to have written history," said April. "I hoped that the leading group would stay together a bit longer and that the pacemakers would be in there longer as well. The wind was also quite noticeable, but I definitely want to come back (to Hannover) and even make another attempt to attack the record.”

Kenya’s Martin Kosgey, fourth in 2014 and third 12 months ago, continued his climb up the results and finished second in 2:11:54. Another Kenyan runner, Moses Masai, was a distant third in 2:15:43.

For a large part of the race, the men’s leading group was on course for a time faster than 2:09. After a halfway split of 1:04:26, at 25km Kosgey and April were still running behind two pacemakers.

However, soon after that the pacemakers dropped out and April forged ahead on his own from about 27km as Kosgey was unable to stay with him.

April was 13 seconds ahead at 30km, which he passed in 1:31:37, and he maintained that lead all the way to the line although Kosgey never disappeared completely from sight.

Now April’s attention will turn to the Rio 2016 Olympic Games. Four years ago, April was unlucky in London when he fell and he limped over the finish line in 43rd place. “It is my goal to achieve a top-10 finish in Rio,” added the South African.

In the women race, Kenya’s Edinah Kwambai won in a personal best of 2:29:17, 18 seconds faster than she had ever run before.

At this point, the leaders were well on course to improve on the course record of 2:27:07, set by Ukraine’s Olena Burkovska in 2013, but in similar fashion to the men’s race, the pace dropped during the second half.

Soon after the 30km mark Kwambai took the lead while Biwott, fellow Kenyan Nancy Koech and Tizita Dida of Ethiopia all started to struggle. Hahner, sixth at halfway, ran a better paced race to pick off four women in front of her and move up to second by the end.

Cecilia Wenig (organisers) for the IAAF 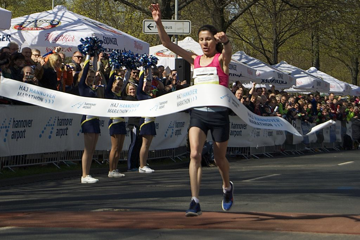 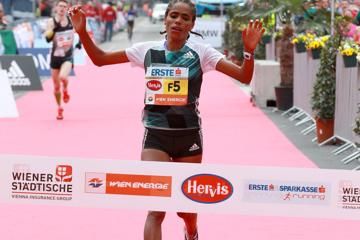 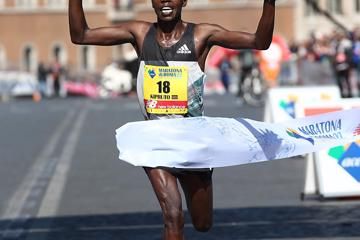 Kipruto triumphs in Rome in his marathon debu... 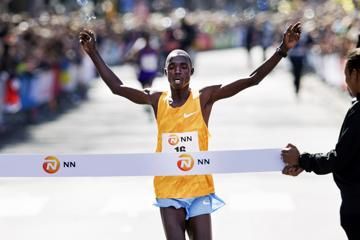