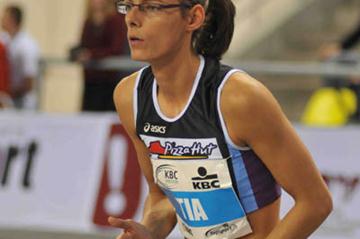 Tia Hellebaut was flying high in the High Jump in Gent on Sunday. The reigning European champion ceared 1.92m, 1.95m and 1.98m by large margins to the great delight of the home crowd in the Topsporthal. And two of her attempts at 2.01m only saw very narrow misses. Jaysuma Saidy Ndure set the crowd on fire when he moved into highest gear in the men’s 60m to set a new personal best of 6.55.

Hellebaut’s 1.98m on her way to the Pentathlon in Valencia

Tatyana Kivimyagi could only rival with Hellebaut until the bar was raised to 1.95m. The Russian had to settle for second place with 1.92m, while Hellebaut soared over 1.98m with ease. At 2.01m the bar hesitated twice, but decided to drop after all.

“Yes, I was absolutely happy with the way I jumped today,” said Hellebaut. “Those were narrow misses at 2.01m, I just need some more jumps at these kind of heights to get things completely right. At the World Championships my focus is on the Pentathlon. Today I gained confidence for my high jumping, but there are four more events and you must be competitive in each of them. My aim is to get a medal in Valencia, but that will be very difficult to achieve.” After the withdrawal of sprint star Kim Gevaert, Hellebaut gave the local fans something to cheer for today!

The tall Norwegian sprinter sometimes looks deceptively sluggish when he’s coming off the blocks, but Saidy Ndure is just flowing all the way in his sprinting action. And he can move into a different gear when the other sprinters are on top of their speed. That is exactly what happened today in the ultimate stages of the 60m.

“I’m walking on my 100m,” says Saidy Ndure with a huge smile. “That means, I’m not specifically training for this event, but I’m trying to get stronger in the 100m. 60m dash is not my distance and nobody can convince me to go to the World Championships in Valencia. I wouldn’t even go if I’d run 6.39 today. The summer is just too important for me. I want to be a finalist at the Olympic Games in the 100m and in the 200m.”

Saidy Ndure played basketball and volleyball and only took up athletics when he moved to Norway in 2002.

“In the beginning I didn’t even like athletics, but my coach told me that I was the biggest talent that he’d ever seen in his life. I guess he must have been right! I’m coming back from a nine weeks training camp in South Africa and I’m returning there shortly to continue my preparation for next summer.”

The women’s 60m dash went to Franca Idoko from Nigeria who beat the favourites in 7.19. “I equalled my PB and that proves my consistency,” the Nigerian said. “With world leading Russian Polyakova in the race, it was a true challenge, but I kept the pressure off. I’m looking forward to the World Championships now where I definitely want to be a finalist.”

Yevgeniya Polyakova only finished third in 7.25. “I raced and traveled a lot these days and I feel tired. It is not always easy to come into a race as a world leader. Now I’m hoping to reach my best level again to compete in the World Championships,” said Polyakova.

Priscilla Lopes-Schliep was the fastest starter and also the most fluent on the hurdles today.

“Well indeed, it felt like a perfect race today,” the Canadian said. “And again I improved my seasonal best performance and that boosts my confidence. In the World Championships I’m trying to win like anybody else does. Anything is possible in a championship like that. I reach for the stars and I’m not holding anything back to achieve my goals.”

The women’s 800m was won by Marilyn Okoro in 2:02.03 in a race where Russian Tatyana Paliyenko put on the pressure. “This was a good race to gain competitive sharpness,” said Okoro. “I stayed composed and I picked my moment to make my effort. I’m getting things right tactically and that is what I need when I want to reach the final in Valencia.”

There was more excitement with the Belgian fans when Hanna Mariën won the 200m leading the field all the way from the outside lane in a new national record of 23.39. Russian Anna Geflikh came in second in 23.59.

Daniel Kipchirchir Komen went into the lead very early after the pacemakers dropped off before the 1000m mark was reached. The Kenyan was left with an awful lot of work to do and he faded dramatically in the last 400m. Khaled Belabbas bided his time and he eventually came back from sixth to attack Kipchirchir Komen in the last lap. The French steeplechaser just left the Kenyan behind and stormed to victory.

“This is not a real surprise to me, because I feel very strong,” said Belabbas. “I judged my race very well and I had something left in the end. I hope this secures my qualification for Valencia.” Kipchirchir Komen said he suffered from a slight cold when he arrived in Belgium and therefore he could not defend his chances the way he would have liked it.

The 1000m was scheduled to become one of the highlights of the meeting. With Abubaker Kaki in the line-up there is always sensation in the air and the young Sudanese certainly wanted to live up to the high expectations. But with 12 athletes on a compact track it is predictable that you’ll see some nervous pushing and bumping around. And that’s exactly what happened. Finally the race turned into a sprinting duel between Kaki and Belal Mansoor Ali that was easily won by the Sudanese.

“I could have won this race,”, said the Bahraini Ali, “but I always try to stay out of the trouble. When I could produce my effort, Kaki was already gone. I want a medal in the 1500m at the World Championships and I’m getting more and more confident.”

Only 18cm separated spots 1 and 6 in the men’s Triple Jump after the fifth round. Cuban Osniel Tosca – placed 6th – then produced his best jump of the day, posting 17.12m to move into the lead. None of the other contenders was able to improve on their ultimate attempt. Mykola Savolaynen from the Ukraine finished second with 16.99m and fellow Cuban Alexis Copello was third with 16.91m.

The Pole Vault witnessed a confident win for Jérôme Clavier from France. In a strong field that included Russian newcomers Yevgeniy Lukyanenko and Sergey Kucheryanu Clavier kept his head cool and his technique right when he cleared 5.70m on his second attempt. Both Russians failed when they tried to respond at the next height of 5.75m.