It’s all about keeping the faith.

Going into tonight’s 1500m at the EBS Herculis meeting in Monaco, world champion Sifan Hassan announced that she had asked for a pace of 61-second laps, which would add up to a second or so under the current world record of 3:50.07.

The Dutchwoman has set world records twice previously in Monaco, most recently over the mile two years ago, and she was feeling confident after rediscovering her love for the metric mile with a victory over Olympic champion Faith Kipyegon at the Wanda Diamond League meeting in Florence last month.

Hassan even floated the idea of adding the 1500m back into her Olympic schedule, having previously declared that she would attempt the 5000m-10,000m double.

She locked in behind the pacemaker from the beginning, her ambition obvious. Only Kipyegon and Ethiopia’s Freweyni Hailu dared to follow and the race was down to three when they reached the bell.

Hassan then turned the screws, but Kipyegon clung to her like a limpet down the back straight as the Dutchwoman stretched out her legs for the run home.

In the past three years races have inevitably gone Hassan’s way in this situation, her unmatched mix of speed and endurance proving irresistible. But not this time.

As they entered the final straight Kipyegon kicked hard, dashing past her rival and sprinting down the straight to win in 3:51.07, a Kenyan record and the fourth fastest time in history. In the last 90 metres she put two-and-a-half seconds into Hassan, who finished in 3:53.60, with Hailu third in a personal best of 3:56.28.

Despite her recent losses to Hassan, Kipyegon said she remained confident that her day would come.

“I knew Sifan was going for a fast race and my goal was to run a fast race here and I thank God that was,” she said. “I am really looking forward to Tokyo and I know it will be a very hard competition but I hope to go there and defend my title.”

Kipyegon gave birth to her first child in 2018, returning in 2019 to finish second to Hassan at the World Championships in Doha, but has now found an even richer vein of form than that which carried her to the Olympic title in 2016 and the world title in 2017. “I came back after giving birth and I feel like a role model for the young mothers out there and the young athletes,” she said. “I hope to show them that when you go for maternity leave, this does not mean the end of your career. You can come back strong and win races.”

Fellow Kenyan Timothy Cheruiyot was also a man on a mission tonight.

With his Olympic dreams hanging in the balance, the world 1500m champion dashed to the fastest time in the world for six years.

An out-of-sorts Cheruiyot was a shock fourth at the Kenyan Olympic trials last month, putting him in grave danger of missing selection. The situation has been complicated by the fact that second-placed Kamar Etiang has not completed the requisite number of anti-doping tests to qualify for the Olympic Games so his eligibility is in question.

That has left Cheruiyot in limbo just weeks before the Tokyo Games, but he thrust aside all that uncertainty to race with clear intent in Monaco.

In the fastest race of the year, he led at the bell and fought off all challenges, setting a personal best of 3:28.28 as four men dipped under 3:30. 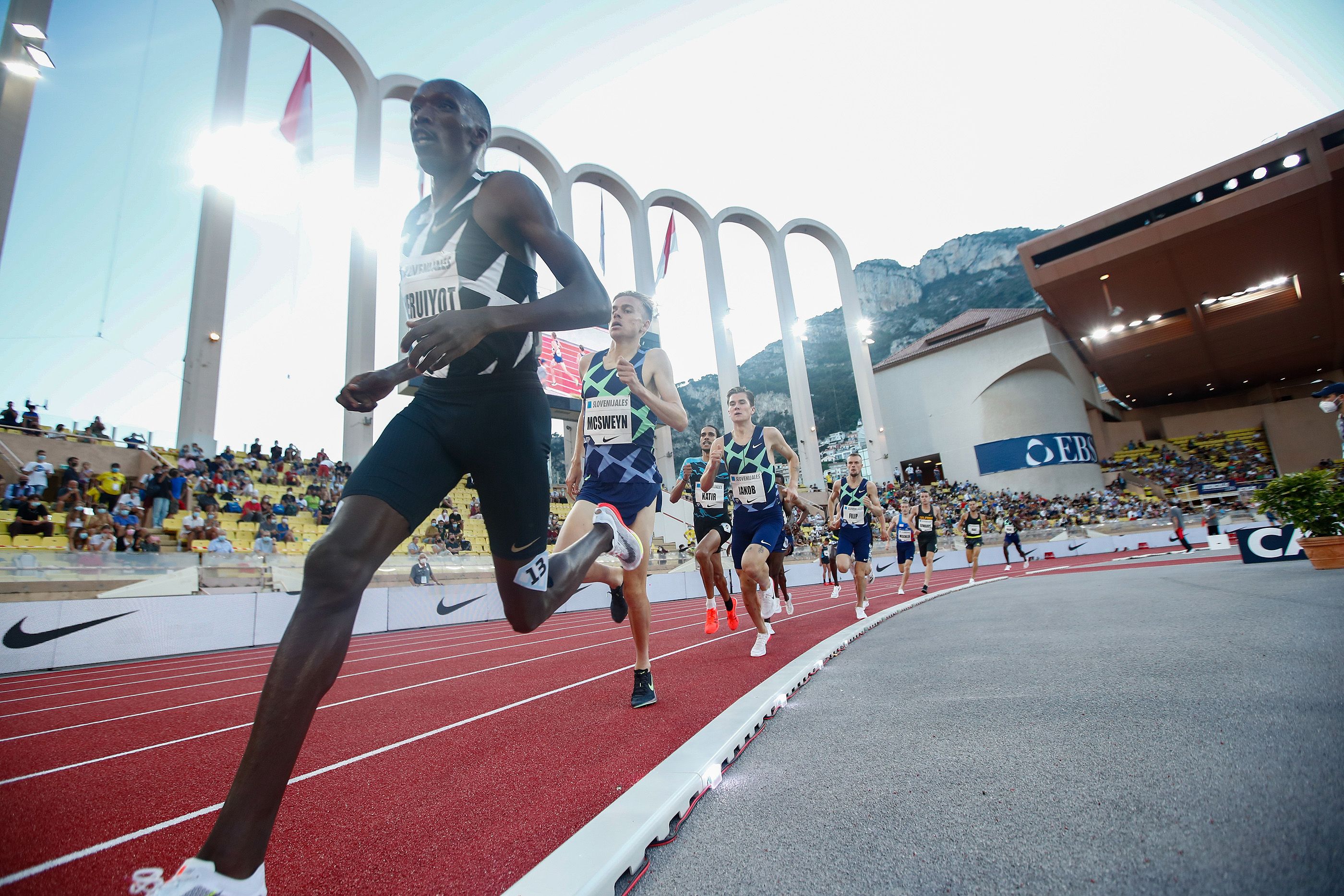 Cheruiyot revealed afterwards that a hamstring injury and the death of a relative on the day of the Kenyan trial had affected his performance there but he still hoped to be selected for the Olympics.

“Hopefully that will be the deciding performance to make the team for Tokyo,” he said.

On a night of high-quality middle distance running, Botswana’s Olympic medallist Nijel Amos roared back to top form, recording the fastest time of the year to down a field full of Olympic contenders.

With his arms flailing, Amos used his awkward but effective running style to propel himself past Kenya’s Emmanuel Kori (1:43.04) and Canada’s Marco Arop (1:43.26).

Britain’s Laura Muir also had the last laugh in a world-class 800m field, looming late to take the win in a big personal best of 1:56.73. Muir had never cracked 1:58 previously for the distance, but had the strength to haul in her training partner Jemma Reekie (1:56.96) and USA’s Kate Grace (1:57.20) in the final metres as all three women set personal best times. 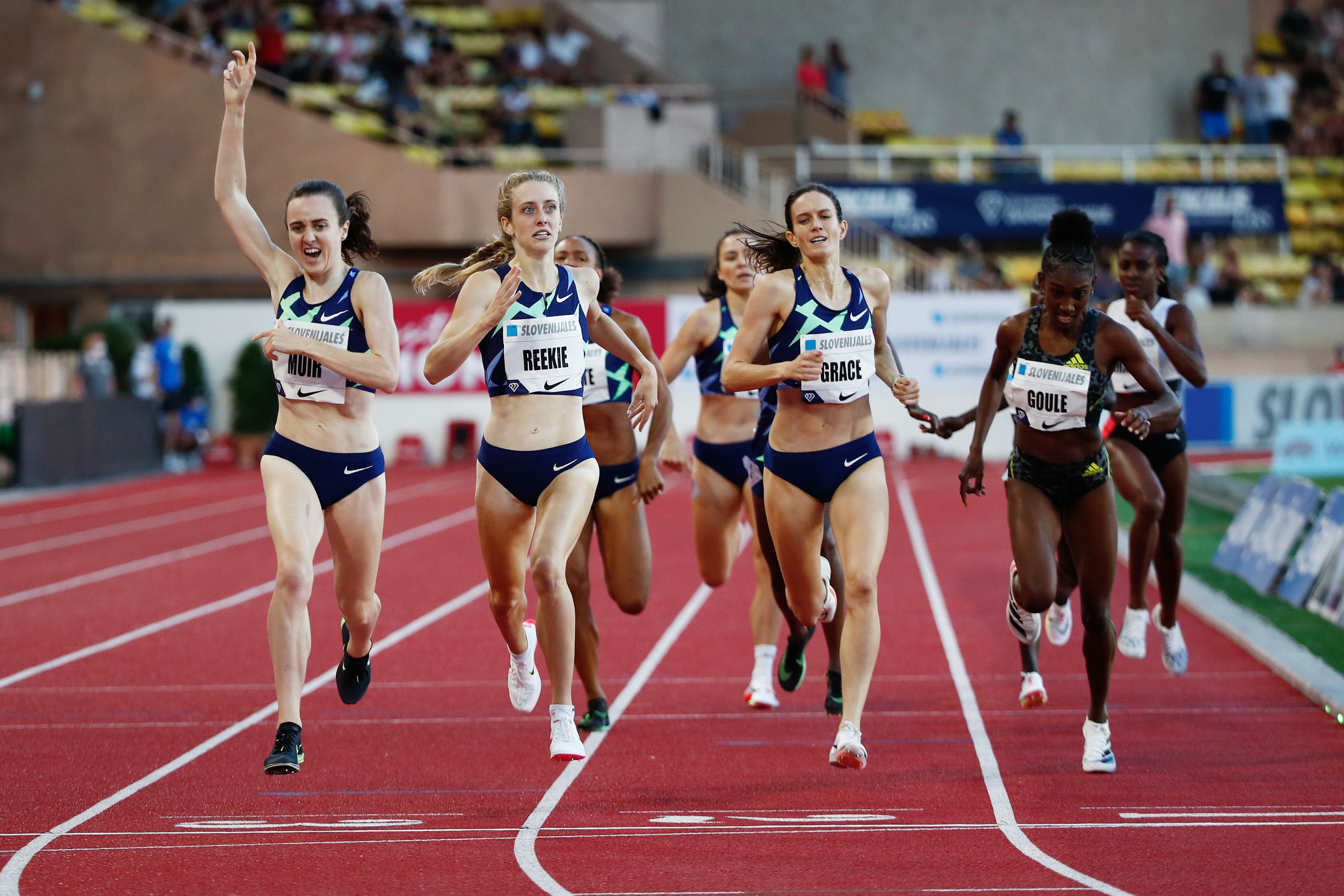 Muir has decided to focus her energy on the 1500m in Tokyo but that will be no easy task as Kipyegon demonstrated.

Both 3000m steeplechase races were suffused with drama and unpredictability at the Stade Louis II.

The men’s race descended into confusion when an official rang the bell a lap too early, but world silver medallist Lamecha Girma still managed to run a world-leading time of 8:07.75 to take the win from Abraham Kibiwot, just 0.06 behind.

In the women’s race, 2015 world champion Hyvin Kiyeng made a break from the pack after two kilometres but misjudged the remaining laps and kicked too early. After crossing the line and hearing the bell for the actual final lap, the Kenyan tried to muster some energy to run another circuit. USA’s 2017 world champion Emma Coburn positioned herself to challenge Kiyeng as they approached the water jump, but Coburn stumbled at the hurdle and fell into the water losing all momentum, leaving Kiyeng to take the victory in 9:03.82, with world record-holder Beatrice Chepkoech second in 9:04.94 and Winfred Yavi third (9:05.45). Coburn regathered herself to cross the line in fourth place in 9:09.02.

There was unpredictability too in the men’s 100m where the form book was upended as the ever-reliable Ronnie Baker claimed victory in 9.91, from African record-holder Akani Simbini (9.98) and Italian Marcell Jacobs (9.99).

World leader Trayvon Bromell, regarded by many as the man most likely to win the Olympic 100m crown in Tokyo next month, lacked his usual zip and could only finish fifth in 10.01.

World 100m champion Shelley-Ann Fraser-Pryce used her early speed to take the lead on the bend in the women’s 200m, but could not hold off the Olympic 400m champion Shaunae Miller-Uibo in the straight.

New world 400m hurdles record-holder Karsten Warholm returned to the competition track for the first time since his heroics in his hometown Oslo last week, eager to challenge his new “personal best” of 46.70.

He made a typically aggressive start, making up the stagger by the second hurdle, but ultimately he could not match the pace he set last week, crossing the finish line in a meeting record of 47.08, still the fourth fastest time of his career and faster than all but five other men in history.

He was pleased to maintain such a consistently high level of performance. “This was a good race so I’m satisfied,” he said.

Brazil’s Alison Dos Santos continued to build his Olympic medal credentials with a strong second place in 47.51, just outside his personal best of 47.34, also set in Oslo. 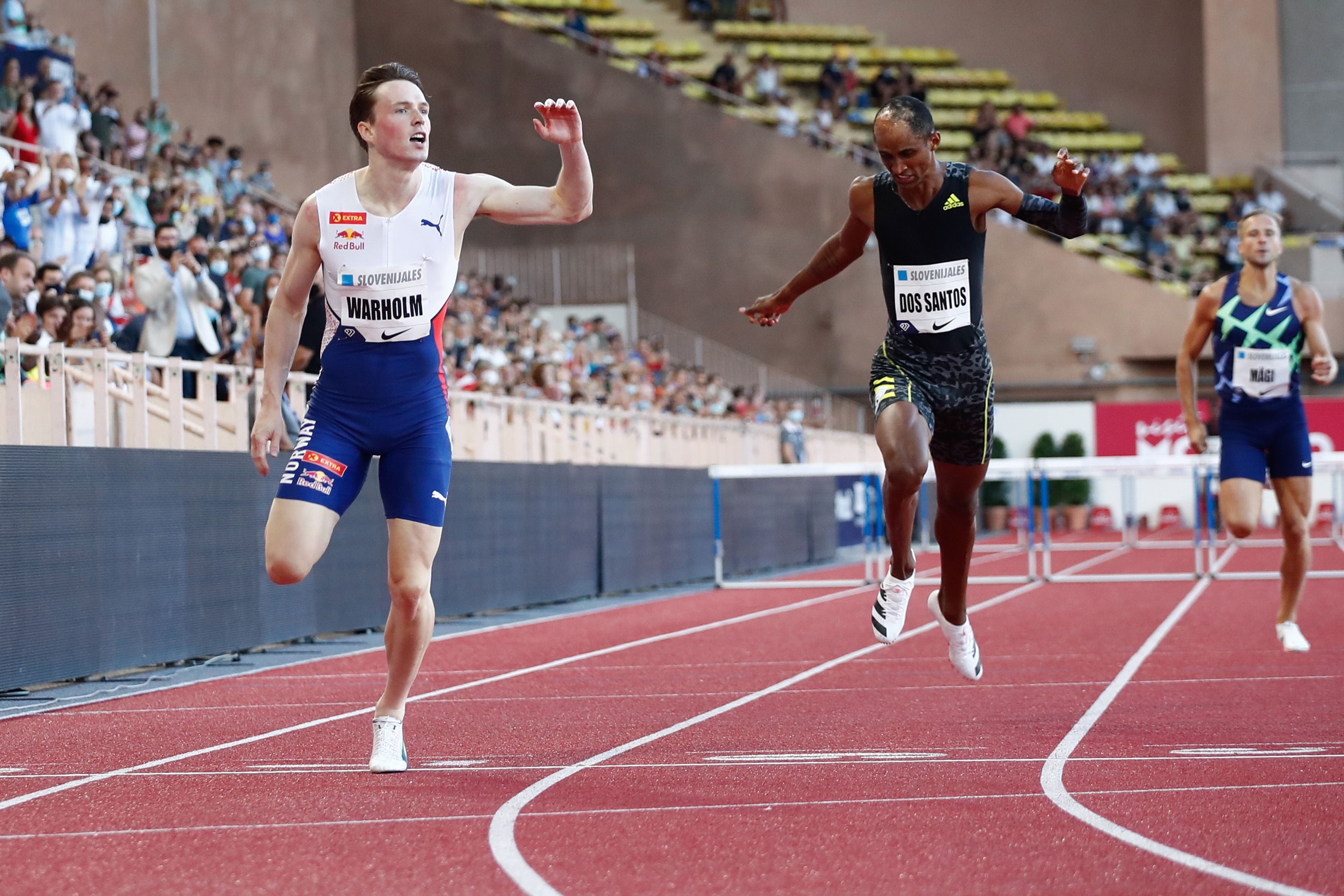 In the field, US pole vaulter Katie Nageotte carried her fine form to Europe to clear 4.90m and claim an impressive victory over world champion Anzhelika Sidorova and Olympic champion Katerina Stefanidi, who both cleared 4.80m.

A tight high jump competition was decided by a jump-off after both neutral athlete Mikhail Akimenko and Canadian Django Lovett were tied with best clearances of 2.29m. Akimenko then claimed the victory by leaping 2.32m in the decider.

World triple jump champion Yulimar Rojas had a tough night at the office, fouling four of her six jumps, including two that looked like they would have challenged the world record (15.50m). She led after five rounds with a best leap of 15.12m but could not find the board in the all-important sixth round under the Final 3 format being trialled in the Diamond League this year.

Jamaica’s Shanieka Ricketts took the win with 14.29m after she was the only one of the top three to register a legal jump in the final.

The men’s long jump also finished with an anti-climax after Miltiadis Tentoglou was the only one to hit the board in the final round (8.24m).

The women’s javelin was the only throwing event on the programme and saw a return to the winner’s circle for the veteran world record-holder Barbora Spotakova, who threw a season’s best of 63.08m in the sudden-death final round, the farthest mark ever achieved by a 40-year-old thrower.