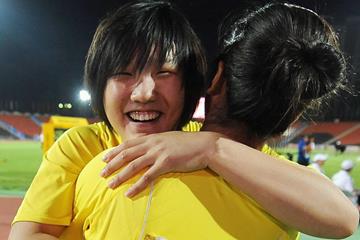 With huge throws in the first round of the boys’ Shot final, Germany’s Patrick Muller and Henning Prufer secured a unique 1-2 finish on the first day of the IAAF World Youth Championships in Donetsk.

Prufer threw down the gauntlet with a PB of 21.94m with his first attempt. Poland’s Konrad Bukowiecki, the 2013 world youth leader, could only respond with 20.10m on his first throw.

Meanwhile, Prufer’s team-mate and friendly rival Muller unleashed an almighty 22.02m with his opening throw to break the national youth best that Prufer had set just minutes before.

Though they both went on to break 21 metres again later in their series, neither athlete improved on their opening throws.

Behind them, though, there were many changes. Croatia’s Martin Markovic bumped Bukowiecki out of the bronze medal position, only to be later usurped by Egypt’s Mohamed Magdi Hamza, who threw 20.58m.

Xie saves her best for last

The very final attempt of this evening’s session proved to be the best performance of the night.

China’s Xie Yuchen was the big favourite for the girls’ Discus final and she took an early lead with 53.24m. Team-mate Liang Xinyun moved into second place with 50.65m, but was overtaken by Germany’s Claudine Vita, who set a PB of 52.59m in round three.

Xie extended her lead with 55.01m in round three and followed it with 54.06m in round five, but her final throw proved to be her best. The 17-year-old sent her discus flying out to 56.34m to break the 55.26m championship record set in 2011 by compatriot Ma Xuejun.

At the Kenyan Trials for the World Youth Championships, relative unknown Lilian Rengeruk handed World junior champion Mercy Chebwogen a surprise defeat in the 3000m. Today in Donetsk, Rengereuk showed that her win in Nairobi was no fluke.

She led from the outset, passing 1000m in 3:01.10 and 2000m in 6:02.53. By this point, Chebwogen already looked spent as Ethiopia’s Silenat Yismaw and Berhan Demiesa were the only ones left in the chasing pack, some 15 metres behind Rengeruk.

The leader kicked at the bell and at one point it looked as though she would be caught by Demiesa. But Rengeruk had saved enough for the home straight, winning with a world youth-leading 8:58.74.

Demiesa took silver in 9:00.06 with Yismaw holding on for the bronze in 9:01.63. Chebwogen, meanwhile, faded to eighth place, almost half a minute behind the winner.

Warholm holds on to lead in Octathlon

In the boys’ Octathlon, Karsten Warholm’s leading margin was reduced from 134 points to just 38 after the third event, the Shot Put. Germany’s Ben Thiele threw a PB of 15.86m to jump from ninth to second overall, but Norway’s Warholm set a PB of 12.94m to maintain the overall lead.

But Warholm extended his lead again in the final event of the first day, the 400m, running the fastest time of the day with 48.09. He holds the overnight lead with 3347.

Feliks Shestopolov is currently the best of the Russians and is fourth with 3137, just nine points ahead of USA’s Gabriel Moore. But world youth leader Santiago Ford is struggling and goes into day two in 13th place overall with 3022.

Ariana Washington of the USA showed exactly why she is among the medal favourites in both sprints, posting the fastest time of the 100m heats with 11.52. World youth leader Angela Tenorio of Ecuador also qualified with 11.56 to win her heat, but she was pushed all the way by India’s Dutee Chand, who set a national junior record of 11.62 to progress as fifth fastest overall.

USA’s Marlon Humphrey is the 2013 world youth leader in the 400m Hurdles and qualified with ease to the next round, winning his heat in 52.00. The fastest in the heats was Jamaica’s Marvin Williams, who clocked a PB of 51.33.

But the big danger could be China’s Wang Yang, whose 51.99 to win the fourth heat was a personal best, although he owns a superior 51.07 clocking over the senior hurdles, suggesting he is set to run much faster over the 84cm barriers.

Jana Reissova of the Czech Republic was the surprise package of the girls’ 400m Hurdles heats. Competing in the last of five heats, Reissova smashed her PB with 59.11 to post the fastest time of the day. World youth leader Helene Swanepoel of South Africa also advanced in 60.34 as five girls in total dipped under 60 seconds.

Before today, Romania’s Florentina Marincu was considered as more of a Long Jump specialist. But after leaping 13.69m, the best outdoor jump by a youth athlete this year, to lead the Triple Jump qualifiers, the 17-year-old has underlined herself as a genuine threat to replicate Christine Spataru’s World Youth horizontal jumps double from 10 years ago.

China’s Wang Rong, who jumped 14.09m indoors earlier this year, qualified easily with her first jump of 13.21m, while USA’s Keturah Orji set a PB of 13.43m, the second-best jump of the day.

In the girls’ Javelin qualification, only four athletes achieved the automatic qualifying mark of 51m. Germany’s Fabienne Schonig had the best throw of the day with her 52.16m, followed by Hungary’s Reka Szilagyi (51.32m). World youth leader Ilaria Casarotto of Italy just made it through to the final in 10th place with 49.38m, more than seven metres adrift of her PB.

Alfred Kipketer, the fastest youth boy in the world this year with 1:46.2, clocked the fastest time of the round with his 1:50.14 with Ethiopia’s Mamush Lencha close behind in 1:50.30. Kipketer’s team-mate Patrick Ronoh won his heat in 1:51.50, while Britain’s Kyle Langford ran a controlled 1:51.88 to take the fourth heat.

Justus Lagat of Kenya was the fastest in the 2000m Steeplechase heats with his 5:35.22, winning by more than four seconds. Nicholas Bett, the athlete who beat Lagat at the Kenyan Trials, was another heat winner in 5:44.69. Ethiopian pair Michaele Atsbaha and Meresa Kahsay also looked very good in qualifying for the final and will no doubt be among the medal challengers.