Uruguay’s Andres Silva produced the best performance of the 16th edition of the Ibero-American Championships, which was held at the Estadio Icaro de Castro Mello in Sao Paulo from 1-3 August.

The 28-year-old won the 400m hurdles in a championship record of 48.65, also breaking his own national record of 49.16 that had stood since 2011, moving him to sixth on this year’s world season list.

Silva, the 2003 world youth octathlon champion, set his first senior Uruguayan 400m hurdles record in 2004, clocking 52.45 as a junior and while still primarily a decathlete. After contesting his last combined events competition in 2005, he focused on the 400m hurdles and went on to reach the semi-finals at the 2009 and 2011 IAAF World Championships.

After two sour seasons in 2012 and 2013, Silva has regained form and focus. In Sao Paulo, Silva ran a superb last part of the race to beat Puerto Rico’s Eric Alejandro, who was leading up until the ninth hurdle and went on to set a personal best of 49.07 in second place.

The gold is Uruguay’s third in the history of the event inaugurated in 1983, following Heber Viera’s 100m title in 2002 and Silva’s own gold medal-winning performance in the 400m in 2006.

“We worked very hard in San Carlos with my coach Andrés Barrios to prepare this season,” said Silva. “I picked up injuries after the 2011 World Championships and only in this campaign I was able to improve again. I knew the race was going to be hard, because Eric Alejandro had posted good times throughout the year. I planned to win the race, not expecting a certain time; the clocking surprised me. 48.9 would have made me very happy, but this is even better.”

Mexico’s world bronze medallist Luis Rivera produced a fine long jump victory with a season’s best of 8.24m (0.1m/s) in round one. But after a foul on his second jump, the 27-year-old national record-holder had to abandon the event.

The initial diagnosis exposed distension to one of the ligaments in his left knee, which will be further evaluated in the next days. If the injury is confirmed, Rivera will not compete at the upcoming Pan-American Festival, which will take place in Mexico in the next week, and will also miss the rest of the European season.

Brazil’s two-time world indoor champion Mauro da Silva was returning from injury, but his comeback didn’t bring a good performance and he finished sixth with 7.56m.

The 28-year-old, who hails from Chigorodo in the Uraba region in Antioquia, has had a breakthrough season, capped with a personal best of 14.58m when finishing fourth at the IAAF Diamond League meeting in Monaco.

Two years younger than world champion and fellow Colombian Caterine Ibarguen, Urrutia – like Ibarguen – started out as a professional nurse in Puerto Rico, and had been coached by Ubaldo Duany.

“I moved to Puerto Rico in 2005 to study at the Universidad Metropolitana,” said Urrutia. “I was formerly a long jumper and I was coached by Duany for five years. After I graduated, I remained in Puerto Rico. Two years ago I switched coaches; I’m now coachd by Colombian Manuel Murillo.”

Urrutia’s first 14-metre jump came as recently as late November last year when she won the Bolivarian Games title. This season has brought an outstanding improvement and remarkable consistency as her best marks in each of her six competitions have been between 14.13m and 14.58m.

Brazil easily dominated the medals table with 16 gold, 17 silver and 15 bronze, totalling 48. Colombia was second with 14 medals, five of which were gold, followed by Mexico, Argentina and Peru. Cuba presented only two athletes and didn’t win any medals, while Venezuela also had a small delegation due to problems with air travel at the nation.

Peru had a positive meeting, earning gold medals through Andy Martinez at 100m, Jorge McFarlane at 110m hurdles (both with national records) and Ines Melchor at 5000m. The 20-year-old Martinez twice broke the 100m national record, first with 10.34 in the heats and then with 10.30 in the final, obliterating the 36-year-old previous national mark of 10.43 set by Fernando Acevedo.

BACK
Pages related to this articleAthletes
Andrés Silva 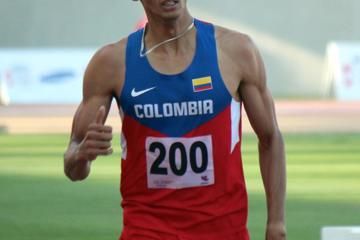 Rodriguez and Garcia help Colombia shine at B... 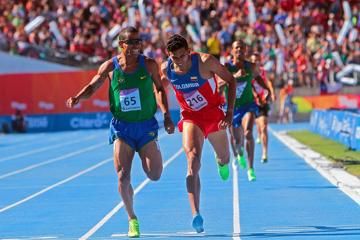