Merga, the 2011 World cross-country champion, and Ayalew both retained their titles from last year.

Merga out-sprinted Kenya’s Emmanuel Bett and Eritrea’a Teklemariam Medhin over the closing 300 metres to grab a one-second victory while Ayalew broke away from Linet Masai some 600m from the finish to capture a convincing win over the Kenyan.

The third kilometre was reached in a moderate 9:08 as the large lead group comprised no less than 22 athletes, all the top Spaniards among them.

It was last year’s third-place finisher Bett who injected some brisker rhythm just before half way (14:56 for the 5km point) and the Kenyan’s change of speed quickly reduced the leading pack to eight; Spain’s former European cross-country champion Alemayehu Bezabeh being the only non-African.

Bett – the fastest man on the track over 10,000m in 2012 and winner of the recent Great South Run – covered the third 2km loop in a frantic 5:46, no less than 16 seconds quicker than the previous one. By then, the two-time Atapuerca victor Merga stayed between third and fifth place but he never moved to the front.

To the delight of the crowd, Spain’s Mohamed Marhum managed to join the head for about one kilometre but he dropped again just before the closing lap.

At the bell, having covered the penultimate circuit in 5:55, Medhin began to push hard to avoid a tight finish with Merga but the Ethiopian managed to stay close to the Eritrean alongside his compatriot Samuel Tsegay, Bett and Timothy Toroitich, while World champion Korir lost any chance of winning some 1.3km from home, having to finally settle for sixth.

The final kilometre witnessed a five-man battle. Merga – the only athlete wearing a yellow vest as opposed to a blue one – perhaps thought he was contesting a major cycling event and began to dictate a quicker pace, Medhin and Bett being the only chasers who could resist his change of speed.

In addition to his trademark devastating burst of speed, Merga took advantage of his circuit knowledge to open a 10-metre gap before the closing 100m and romp home one second ahead of Bett, who out-sprinted Medhin to take the runner-up place.

“I felt strong from the very early stages as I’ve been training hard the previous weeks in my native Ethiopia thinking of today’s race,” said a joyful Merga, who now holds a perfect card of three wins out of three performances in Atapuerca. “As usual I decided to save my energy for the last part of the race and it paid off. After three wins, I’ll come back next year again.”

Ayalew in a class of her own

The 7839km women’s race had been billed as a rematch of last year’s event when Masai fell during the closing kilometre, losing any chance to win against Ayalew. Yet the Ethiopian proved that her win hadn’t been a fluke as she once again prevailed over Masai at the 2013 World Cross Country Championships.

The early pace – 3:35 for the opening kilometre – was comfortable and no less than 10 women ran in the lead for the first 10 minutes. By halfway, three-time World cross-country silver medallist Masai took command of the race to make the first serious move as only her fellow Kenyans Mercy Cherono and Janet Kisa, along with the Ethiopian duo of Ayalew and Marta Tigabea, could live with her pace.

Shortly after the 5km point, reached in 17:22, recent Soria winner Tigabea began to lose ground as Masai had covered a 2km section in 6:25, some 16 seconds faster than the previous circuit.

At the bell, Ayalew hit top gear in the matter of a few strides and the Olympic Steeplechaser fifth-place finisher built a huge gap over her pursuers, except for Masai.

The long-legged Kenyan regained the lead with 1.5km to go, but Ayalew remained on her heels with relative ease. The key moment came with roughly 600m left when the 23-year-old Ethiopian unleashed a powerful attack while negotiating a set of artificial barriers to leave Masai way back.

Ayalew finally won by the handsome margin of nine seconds over Masai, herself five seconds ahead of Cherono, the current World 5000m silver medallist.

While Ayalew expressed her satisfaction on her defence of the title, Masai revealed: “I’ve just recovered from an injury, I just couldn’t do anymore.” 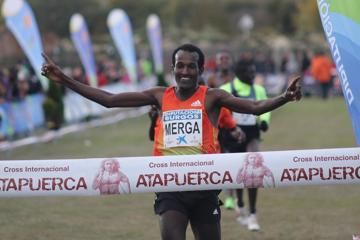 Merga and Ayalew score Ethiopian double in At... 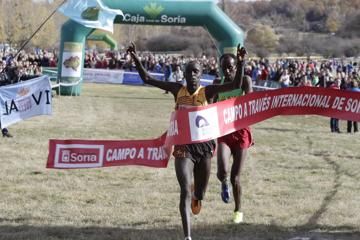