There may have been four world leads at the 2014 IAAF Diamond League meeting in Oslo on Wednesday (11), but if there was one record on the night that delighted the Norwegian fans who packed the famous stands at the ExxonMobil Bislett Games the most, it was in the Dream Mile.

The Dream Mile always commands top billing on the Bislett programme but even a world record for winner Ayanleh Souleiman would have been unlikely to have got a bigger cheer than Henrik Ingebrigtsen’s Norwegian best of 3:50.72 in fourth place.

Djibouti’s Souleiman successfully defended his Dream Mile title in style, holding off the fast-finishing New Zealander Nick Willis to break 3:50 for the second time in two weeks, but the roars were reserved for Norway’s European 1500m champion who closed down on Germany’s Homiyu Tesfaye in the final stages of a breathless race.

It wasn’t the meeting’s only eye-catching performance, however, as Tianna Bartoletta produced the first seven-metre leap of the year to improve her own world long jump lead to 7.02m; Yenew Alamirew got revenge over Caleb Ndiku in the 5000m, clocking a 2014 best of 13:01.57; Jairus Birech added to his rapidly growing reputation with a commanding win in the 3000m steeplechase in 8:02.38; and Frenchman Pascal Martinot-Lagarde notched up his second 110m hurdles win on the trot, slicing 0.01 his world-leading time from Eugene with 13.12.

The 5000m had been billed as a sure-fire sub-13 race and a chance for Galen Rupp to have a crack at his fourth North American record of the year.

A winning time of about 12:50 had been the target, but in the end the statisticians had to be satisfied with a world-leading performance as Alamirew delighted the small band of Ethiopian fans packed around the home bend by beating Ndiku, avenging his Eugene defeat by the Kenyan just over a week ago.

Alamirew also knocked Ndiku from the top of the world list as he extended his lead in the Diamond Race.

“I won the Diamond Race last year and I want to do the same again,” said the winner, who is also gearing up for the African Championships later this summer. “I think later this season I can be faster.”

As for Rupp, he was outsprinted over the last lap by Ndiku but held off Kenya’s Thomas Longosiwa for third in 13:03.35, his best of the year, but some way short of Bernard Lagat’s US record of 12:53.60, which had been mooted as his target.

Alamirew played the waiting game to perfection, following Rupp throughout the early laps as pacemakers Gideon Gathimba and Vincent Rono streaked ahead.

Longosiwa then took the lead and kicked hard 800m out, followed by Alamirew, Rupp and Cornelius Kangogo.

This quartet were bunched together at the bell with a 15-metre advantage on the chasing Ndiku, who made up huge ground over the final circuit and crossed the line just 0.18 behind the winner in 13:02.15.

By contrast, Birech produced another commanding win in the steeplechase to claim the first world lead of a glorious night of action.

The 21-year-old Kenyan followed up his surprise victory in Rome last week by comfortably beating a field containing his compatriots, the 2008 Olympic champion Brimin Kipruto and former Olympic bronze medallist Paul Koech, in a personal best of 8:02.35.

Into the bargain, Birech moved ahead of Ezekiel Kemboi on the world list and in the Diamond Race for this event. USA’s Evan Jager was a surprise in second place with 8:06.97, with Koech fourth and Kipruto down in 10th.

Birech had reason to thank Jager after the race, as it was the US runner who took it on when the pacemakers dropped out with four laps to go after passing 1000m in 2:38.88; these two then established a lead of more than 30 metres over the rest.

The Kenyan took the initiative 1000m out (they passed 2000m in 5:21.44), leaving the chasers 50 metres back, and he then sprinted home more than three seconds clear of his US rival.

“I was afraid to go for a fast pace as I was competing twice recently in Rome and at the Kenyan trials,” he said. “I think in Lausanne (on 3 July) I can go under eight minutes. I qualified for the Commonwealth Games and I think I’m now ready to beat all my teammates, including Kemboi.”

Bartoletta needed only two attempts to claim maximum points from her first IAAF Diamond League meeting of the season. The former world champion bowed out after leaping 7.02m in round two, nine centimetres farther than she jumped in Marrakesh three days ago.

Great Britain’s Shara Proctor emerged as the runner-up with 6.78m from round four.

Martinot-Lagarde’s aim in the hurdles was to reproduce his race from Eugene, and the Frenchman did that almost exactly, running 0.01 quicker to equal his personal best and beating a classy field containing 2011 world champion Jason Richardson and Moscow 2013 medallists Sergey Shubenkov and Ryan Wilson.

“I wanted to do the same quality race as in Eugene and I did it,” said Martinot-Lagarde who credits his breakthrough to improvements in his technique.

The world indoor silver medallist is now aiming for a sub-13 run at the forthcoming French Championships.

BACK
Pages related to this articleAthletes
Tianna MADISON 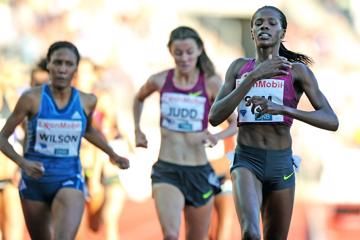 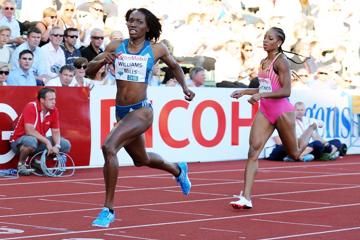