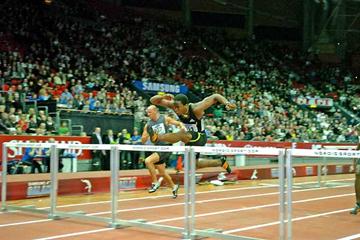 The Pole Vault star had three unsuccessful attempts at 4.96m (1 cm higher than her own World Indoor record) but still won in 4.61m. Elsewhere, Dayron Robles (7.39 at 60m Hurdles) and Kim Collins (6.56 at 60m) took the opportunity to show their top form ten days before Valencia and like most of the participants, it was their last meeting.

Isinbayeva back to winning routine

This meeting raised interest for mainly two reasons regarding the presence of Yelena Isinbayeva. The first was her expected bid to break the World Indoor record she raised to 4.95m in Donetsk on 16 February. The second was that she was beaten in her very next competition, for the first time indoors since 2004 and 23 consecutive wins in or outdoors, in Bydgoszcz by Svetlana Feofanova.

Questions about the end of her dominance in her event were then raised but Aubière would eventually turn into a demonstration of her mental toughness and self-confidence.

Her first bar of the competition, 4.61m, was the last one her Brazilian training partner Fabiana Murer could clear. However, Isinbayeva was leading as she made it at her second attempt, while Murer did it at her last one. Murer was left alone in her trials at 4.71m, which she missed three times.

In the meantime, her Russian rival passed and tried, unsuccessfully, 4.96m. She chose a big pole for this World record attempt but couldn’t bend it properly.

“Maybe it was a lack of run-up speed, or I still haven’t recovered since the 4.95m, because for that jump, I used an even bigger pole.”

Isinbayeva then went into technical considerations.

“After the 4.95m, people told me, ‘Now, you’re just perfect in your jump’, but I’m not happy yet, even though it’s much better than last year. My first part, run-up and take-off, is good, now I have to improve the second part, the movement over the bar. Before (she joined coach Vitaliy Petrov), it used to be the opposite, bad run-up and good second part with vertical action from a straight body. I’m working on fixing some details.”

Now back to her winning routine, she gave explanation to her Polish faux-pas.

“I expected to compete bad so soon after my World Indoor record, because I went to Saint Petersburg to celebrate the record and to meet our President Vladimir Putin. I then competed in Poland feeling empty, without energy. Thus, this loss doesn’t make me nervous or afraid of anybody.”

Dayron Robles was unchallenged during his eighth 60m Hurdles competition this season. An easy-looking 7.48 in heats warmed-up the Cuban before the final. Several false starts delayed the actual start, which forced the favourite to be cautious in order to avoid a disqualification.

However, the last part of his race was storming as he clocked 7.39, 0.09 off Colin Jackson’s fourteen-year-old World record and 0.06 off his own recent Area Record.

“I came here with the aim to run under 7.40 so I’m satisfied,” he said. “The several false starts were a perfect preparation actually, because if it happens again in Valencia, I will be used to it!”

The accumulation of races this winter apparently didn’t affect him, and, once more, Robles found positive points where most observers would see problems.

“It’s very good for me to race a lot, in order to prepare spring competitions. This is my way to get ready. This race in Aubière was fundamental in this matter, as it will be my last before Valencia.”

On the other hand, Chinese Liu Xiang, Olympic and World Champion at 110m Hurdles has not competed yet indoors and still will be his most dangerous opponent.

“I don’t really care about him, because he always comes by surprise,” says Robles. “He is the (110m Hurdles) World record holder, so I have to be ready every time he is competing. Maybe competing together will push us to lower our times.”

During the final, Collins had the best acceleration and maintained his short lead through the finish line, crossing the line in 6.56, from Fasuba 6.58 and Aikines-Aryeetey 6.59.

This performance signed the comeback to the highest level for the 31-years-old Collins who had sub-par results for the past two years.

Indeed, Collins gets closer to his personal best, 6.53, set when winning silver at 2003 World Indoors Championships.

“I know that some sprinters are skipping the indoor season or the World Indoors Champs. But my preparation is different; I’ve had my better outdoor season in 2003 after running indoors. Valencia’s edition is wide open, I think it’s everyone race, many have the ability to win.”

Since his best years, Collins has been coached by Glenn Mills in Jamaica and no major changes have been made in his training, “except I train more, and I have added weight training for some time,” detailed the sprinter. “I do some bench press, calf and hamstring work, hip raises but with light weights only, as plyometric exercises remain my main strength provider.”

Bulgarian Inna Eftimova broke her personal best to win the women’s 60m in 7.28, in the absence of Christine Arron. The French favourite decided not to run during her warm-up because of a hip pain, seemingly caused by too much decelerations in short run-up tracks in warm-up pits during her last three indoor competitions. Further medical examination results will determine her participation at the World Indoor Championships.