France’s Jimmy Vicaut equalled the European record that he already shares with Francis Obikwelu when winning the 100m in a world-leading 9.86 (1.8m/s) at the Meeting Montreuil on Tuesday (7).

Competing in just his second 100m race of the year, having recorded 9.99 in his opening 100m in Rome last week, the 24-year-old almost withdrew from the race after feeling a little discomfort in his right hamstring during warm-up.

But as he was competing on his home track with his family in the stands, he decided that he couldn’t disappoint his fans.

Once the race got under way, Vicaut had a strong start and began to edge ahead after about 30 metres. He hit top speed in the second half and pulled away from the field to win by a comfortable margin.

Vicaut’s winning time matched the 9.86 PB he set last year when finishing second at the IAAF Diamond League meeting in Paris. It also broke the meeting record of 9.95 set by Yohan Blake in 2011, just two months before the Jamaican won the world title in Daegu.

Wilfried Koffi Hua of the Ivory Coast was second in 10.10 while Britain's James Ellington clocked a PB of 10.11 in third.

World junior champion Margaret Wambui took two seconds off her PB to win the 800m in 1:57.52. The pace maker led the field through the first lap in 58.10 with Wambui tucked in close behind. The Kenyan was soon out on her own as she kicked on to take a comfortable victory. Fellow Kenyan Emily Cherotich was a distant second in 2:00.14.

World leader Nicholas Kipkoech made it a Kenyan 800m double by winning the men’s event. The first lap was covered in 48.96 with France’s Pierre-Ambroise Bosse in the pace maker’s shadow. The national record-holder continued to lead after the pace maker dropped out but was caught by Jonathan Kitilit coming into the home straight.

Kipkoech also moved past Bosse and on to the shoulder of his compatriot before passing Kitilit in the final 10 metres to win in 1:43.85. Kitilit crossed the line just 0.04 in arrears as Bosse ran 1:44.53 for third place.

It may have been her shortest winning distance since last July, but Anita Wlodarczyk’s throw of 76.61m in the hammer is still better than any other woman in the world has managed this year.

After a foul in the opening round, the Pole sent her hammer out to 74.03m and then produced her winning mark in the fourth round.

Including other marks achieved within her series of her various other competitions this year, the two-time world champion now owns the best 17 throws of 2016.

Azerbaijan's Hanna Skydan, second with a national record of 73.87m, was the only other woman to throw beyond 70 metres.

Yaimi Perez was equally dominant in the discus. The Cuban took the lead in round two with 65.68m and then improved in the fifth round to 67.91m, the second-best mark of her career after the 68.86m PB she set earlier this year.

Ukraine's Natalia Semenova produced a throw of 62.93m in the final round to move into second place, one position in front of 2013 world silver medallist Melina Robert-Michon.

The helpful tailwinds occasionally went beyond the allowable 2.0m/s limit, as was the case in the men’s 110m hurdles. Britain’s Andrew Pozzi led for most of the way before clipping the eighth hurdle, clattering the ninth and just managing to stay on his feet over the 10th. It allowed France’s Pascal Martinot-Lagarde to come through and take victory in 13.23 (2.6m/s).

Aurel Manga had a huge breakthrough to take a surprise second place in 13.25, while Pozzi held on for third with 13.31.

Dalilah Muhammad won the 400m hurdles by about 10 metres, clocking 54.37, her fastest time since taking the silver medal at the 2013 IAAF World Championships. 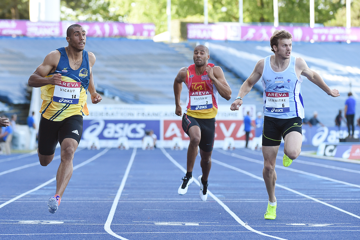