Katarina Johnson-Thompson said on the eve of the European Indoor Championships that she was “riled up and raring to go” and while the 22-year-old leaves Prague with her first senior title, she was visibly disappointed to miss Natallia Dobrynska’s world pentathlon record of 5013 points by a tantalising 13 points.

“This is my first big major medal and national record, I appreciate it a lot,” said Johnson-Thompson, who broke Jessica Ennis-Hill’s British record by 35 points. “But I felt I was able to go even further and was ready for the world record.”

Johnson-Thompson, 22, still put together one of the most dominant performances in a combined-events competition at a major championships, winning four of the five events. Her winning score of 5000 was the second biggest in history, a world under-23 best and a championship record. Her winning margin of 304 points was the biggest at the European Indoor Championships.

Another record attempt looks set to be on the cards next winter, as Johnson-Thompson said the 2016 IAAF World Indoor Championships in Portland, Oregon are in her plans. “Hopefully I can get the world record there,” she said.

Belgium’s Nafissatou Thiam, who briefly led from Johnson-Thompson after reaching out to 14.80m in the shot put, claimed silver in a PB of 4696, while Eliska Klucinova claimed the first of three medals for the hosts with bronze in a Czech record of 4687.

Klucinova set three lifetime bests en route to her first senior medal, including a 15.07m PB in the shot.

Torneus and Storl crowned champions on the in-field

The men’s long jump looked a depleted event on paper with Olympic champion Greg Rutherford and Eusebio Caceres among others absent but the nearly-man of long jumping Michel Torneus claimed his first major title with a Swedish record of 8.30m.

Torneus, who finished second to Aleksandr Menkov two years ago, backed up that world-leading mark with an 8.03m jump before sitting out for the last three jumps, clearly satisfied he had already done enough.

“I will try to stay focused towards the outdoor season to maintain my shape so that I'm able to fight for first-place finishes outdoors,” said Torneus.

Radek Juska, whose PB before the final stood at 7.94m, claimed an unexpected silver for the hosts with 8.10m while Andreas Otterling also set an outright PB of 8.06m for Sweden’s second medal in the event.

David Storl underwent knee surgery in the off-season and despite admitting his “knee hurt a little bit” in the competition, the German still achieved the only two 21m-plus throws of the final.

After taking the lead with 21.12m in the third round, he extended his advantage in the final round with a 21.23m putt for his first European indoor title.

Defending champion Asmir Kolasinac had to settle for silver with 20.90m, while Ladislav Prasil provided the hosts with bronze in a season’s best of 20.66m.

Having set a national 110m hurdles record of 12.95 three weeks before the European Championships, Pascal Martinot-Lagarde arrived in Zurich as the clear favourite but only came away with a bronze medal.

By contrast, he came into Prague slightly under the radar. A hamstring injury forced the Frenchman to withdraw from a number of scheduled meets, and he only confirmed his participation a week before the championships.

Martinot-Lagarde was beaten in the semi-final by team-mate Dmitri Bascou, 7.46 to 7.53, but he came good a few hours later in the final. Martinot-Lagarde and Bascou were fastest away but the former got it on the dip, winning in 7.49 to Bascou’s 7.50.

After a middling start, world junior champion Wilhem Belocian came through to ensure the first French clean-sweep in this event in 7.52.

Alina Talay from Belarus was the outstanding favourite in the women’s equivalent, and she capped off a near-unbeaten indoor season with the title in a national record of 7.85.

Britain claimed an unexpected brace of medals through Lucy Hatton and Serita Solomon.

Neither of them had broken the eight-second mark before Prague but they lowered their best ever times to 7.90 and 7.93 respectively for silver and bronze.

Lavillenie safe, but not without a scare

Renaud Lavillenie’s quest for a fourth title on the bounce almost ended in disaster as the world record-holder, who is surely the hottest pre-event favourite in Prague, needed three attempts to clear his opening height of 5.70m.

“I guess this was my first championships where I needed three attempts to clear a height and to qualify,” said Lavillenie.

“But having two defaults was also a positive thing for me because it gives me some pressure now. I am in a very good shape, so tomorrow there will be a real competition.”

World 400m hurdles champion Zuzana Hejnova admitted she was “very, very nervous” before making her 800m debut at a major championships and she was run out of qualifying, finishing fourth in a slow-run heat in 2:05.34.

Competing in his specialist event, Pavel Maslak dominated his 400m heat and semi-final to the delight of a sell-out crowd. The reigning champion controlled the first two rounds from the front, running 47.23 in the heats, and 46.46 in the semi-final.

Maslak leads the 2015 world list with 45.27 but the noticeably flat banking in the O2 Arena might make it difficult to beat that mark in tomorrow’s final.

Running from lane three, Denisa Rosolova employed identical aggressive tactics to win her 400m semi-final in 52.48 but Ukrainian veteran Nataliya Pyhyda goes into the final as fastest with 52.44 from the first semi-final.

Another noteworthy qualifying performance came from renowned front-runner Anita Hinriksdottir of Iceland, who towed a field including Olympic bronze medallist Ekaterina Poistogova through 200m in 28.94, 400m in 59.80 and 600m in 1:30.37.

The Russian eased past Hinriksdottir to take the heat in 2:01.44 while Hinriksdottir lowered her European indoor junior record from 2:01.77 to 2:01.56. 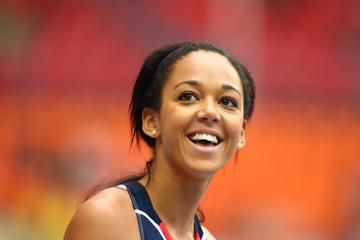