World-leading times in sprints and hurdles in Karlsruhe

The initial impression that the track in Karlsruhe’s Messe arena, imported from Sweden after use at the 2013 European Indoor Championships, was going to provide quick times proved to be prophetic as all three of the events down the inside straight provided world-leading times at the opening 2016 IAAF World Indoor Tour meeting on Saturday (6).

Keni – “I prefer Keni but, don’t worry, I’ll answer to Kendra” – Harrison admitted she was nervous before the start of her first international indoor meeting but she showed that her times clocked in the USA were definitely no fluke or misreading as she sped to a world-leading 60m hurdles time of 7.82 in her heat at the Indoor Meeting Karlsruhe.

Expectations were high that she would go faster still in the final an hour later but a poor start unfortunately put paid to that premise.

Harrison’s reaction time in the final was a sluggish 0.171 but once she got into her running off the first hurdle, her silky technique and speed between the barriers brought her clear of her rivals in 7.86, still significantly faster than anyone in the world has run this year.

World indoor champion Nia Ali was second in 7.94, having won her heat in 7.96, with Great Britain’s European 100m hurdles champion Tiffany Porter third in the same time but relegated down the results after a study of the photo-finish.

Dutch sprint star Dafne Schippers endured a similar scenario in the 60m, without the barriers.

The world 200m champion clocked a world-leading 7.07 in her heat and first race of 2016, crossing the line just 0.02 away from her personal best.

However, a languid reaction to the gun in the final meant that she had to work hard all the way down the straight and only overhauled USA’s Barbara Pierre in the final few metres, the pair being timed at 7.08 and 7.09 respectively.

No Portland pressure for Schippers

In the men’s 60m, USA’s Mike Rodgers quickly put behind him the disappointment of being disqualified in Dusseldorf on Wednesday and clocked a world-leading 6.52 in his heat with the evergreen Kim Collins winning the other heat in 6.54.

In the final, Rodgers got a less than perfect start but finally got the better of Collins, one lane to his inside, the pair being given exactly the same time as their heats, 6.52 to 6.54. It brought an end to Collins' 14-meeting winning streak at the distance, dating back to 2014.

The other world-leading time on the track came in the women’s 1500m.

Ethiopia’s world indoor silver medallist Axumawit Embaye was the fastest woman in the 1500m field and fulfilled her role as favourite when winning in a world-leading 4:08.22, edging to the front with just over two laps to go and holding off all her rivals.

However, there was a terrific race over the last lap with seven women still in contention at the bell.

Germany’s 18-year-old Konstanze Klosterhalfen pressed Embaye down the home straight and was rewarded with second place in a European junior indoor record of 4:08.38.

Behind the leading pair, the next two home also set indoor bests.

Ireland’s Ciara Mageean finished third in a national record 4:08.66 and world steeplechase bronze medallist Gesa-Felicitas Krause showed good speed, and inevitably got plenty of cheers from the home crowd, with fourth place in 4:08.91.

BACK
Pages related to this articleAthletes
Michael RODGERS 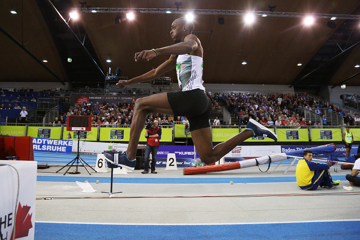 Copello leaps to the top of the triple jump l...