Perseus Karlstrom and Sandra Lorena Arenas took the line honours in the Adelaide leg of the IAAF Race Walking Challenge on Sunday (10), closing strongly for comfortable victories in the men’s and women’s 20km, respectively.

But there were consolation prizes aplenty for the local hopes, too, with Dane Bird-Smith and Katie Hayward virtually clinching selection for the IAAF Doha 2019 World championships in taking out the Australian national and Oceania titles in second place in their respective races.

There were also hopeful signs of a return to full fitness and form from London 2012 50km Olympic champion Jared Tallent who completed the race “pain free”, the first race he has finished in almost two full years.

Karlstrom extends his ‘Down Under’ Streak

Sweden’s Karlstrom is a frequent visitor to Australia and obviously enjoys his time here. In winning on Sunday in 1:20:05, he made it two wins on the trot in the Adelaide challenge event and extended an undefeated streak ‘down under’ which dates back to early 2016.

Karlstrom did not have it all his own way, however, not taking the lead until just before the 16km point.

Bird-Smith, the Rio 2016 Olympic bronze medallist, made his intentions clear from the first of ten 2km loops along the River Torrens on the edge of Adelaide’s central city district. His lead had gone out to 30 seconds after three laps and was still at 20 seconds as he went through half-way in around 40:50 with Karlstrom and Canada’s Evan Dunfee together in pursuit.

Lap by lap Karlstrom closed in on the Australian, A deficit of 15 seconds at 12km, shrunk to eight at 14 and with two laps to go the Swede had moved into a narrow lead. Whatever he felt about this change of circumstance, Bird-Smith was conscious he also had consolation prizes on offer.

“I wasn’t too fussed as ‘Percy’ (Karlstrom) came past,” Bird-Smith told Athletics Australia after the race. “I was a bit like there isn’t much point in trying to chase him down, I figured I would just get through the race and be the first Aussie home and I got a world qualifier – so job done, I’m very happy.”

Bird-Smith was still able to close the race faster than he had started out, crossing the line in 1:20:52. Eider Arevalo, Colombia’s London 2017 world champion, came home third in 1:21:36, ahead of Lithuania’s Marius Ziukas, Dunfee and Ever Palma of Mexico.

Bird-Smith also took out both the Oceania and Australian titles at 20km, the former ahead of Rhydian Cowley and New Zealand’s Quentin Rew and the latter from Cowley and Tyler Jones.

There was also good news from Jared Tallent who got through the race in 20th place in 1:27:37, a little slower than his target time of 1:26, but achieved with minimum discomfort.

“It was a positive race. (It’s) a good base to build on,” said Tallent. “Forty-three minutes at 10km, slower second half, but overall I’m happy to be back in a race and pain-free.”

Arenas looked the class of the women’s race on paper, and she proved to be as formidable as expected on the road.

Sandra Arenas at the 2016 Olympic Games in Rio

More surprisingly, it was Hayward, who does not turn 19 until 23 July this year, who was equally as aggressive as her (slightly) older Australian rival (who turns 21 next week).

Hayward also took out the Oceania and Australian titles, with Montag and 50km specialist Claire Tallent, who finished fifth, taking the minor medals. Lithuania’s Brigita Virbalyte-Dimsiene finished fourth and New Zealand’s Alana Barber was one place out of the Oceania medals in sixth.

It was Hayward’s debut 20km, and took her straight away to third-fastest Australian woman in the event. Her 1:29:25 is the equal fourth-fastest Australian performance all-time, behind Jane Saville’s national record 1:27:44, Claire Tallent’s 1:28:53. Saville also has performances of 1:29:05 and 1:29:25, equal to Hayward’s Adelaide time.

With Hayward and Montag both at the nascent stages of their senior careers, and Tallent finding a new event at 50km, Australian women’s race walking is suddenly on an upward trajectory again.

BACK
Pages related to this articleAthletes
Perseus KARLSTROM 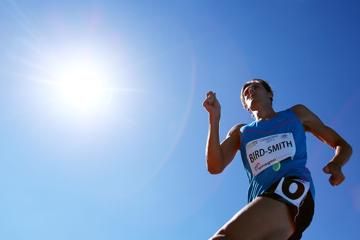 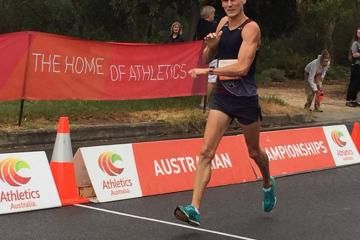 Bird-Smith and Lamble impress in Adelaide...