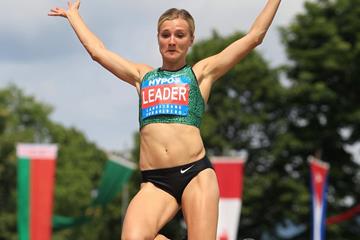 Germany’s Kai Kazmirek and Canada’s Brianne Theisen-Eaton hung onto their overnight leads with strong second days to emerge triumphant at the 41st Hypo-Meeting in Gotzis, the third leg of the 2015 IAAF Combined Events Challenge, on Sunday (31).

With a world-leading score of 8462, Kazmirek – who finished second last year in the Mosle Stadium – added his name to the prestigious roll of honour of this meeting, six years after the last German win was achieved by Michael Schrader.

Schrader, the world silver medallist, crowned a successful comeback after almost two years of injury problems with 8415 for second place while South Africa's Willem Coertzen had a strong second day to finish third and improve his own African record to 8385.

Kazmirek started the second day with 14.52 in the 110m hurdles to defend his leading position by just 10 points over his compatriot Rico Freimuth, who clocked the second-fastest time with 13.99. Canada’s 2013 Gotzis champion Damian Warner, who had made three fouls in the shot on Saturday, set a meeting record of 13.54.

After six events, Kazmirek led with 5317 points to Freimuth’s 5307. Jeremy Taiwo followed in third place in a close competition with 5303, just 14 points covering the top three at this stage.

Freimuth, the son of two-time Gotzis champion Uwe Freimuth, then threw a solid 48.07m in the discus to take the overall lead. Taiwo produced a personal best of 43.16m to take over in second place with a gap of 31 points over Kazmirek who had a best throw of 40.96m.

Javelin the key for Kazmirek

Kazmirek cleared 5.10m in the pole vault and improved to second place, just 44 points behind Freimuth who vaulted 4.80m, but then regained the overall lead with 7747 after throwing 64.45m in the javelin to lead Freimuth by just nine points.

Schrader was third going into the last event with 7623 after clearing 5.00m in the pole vault and throwing 61.44m in the javelin.

Coertzen, eighth after the first day, won the javelin with 68.48m, which enabled him to move up to fourth going into the 1500m.

Kazmirek clocked 4:34.61, a result which was enough to win with 8462, just nine points shy of the PB he set when finishing second to two-time world champion Trey Hardee in Gotzis last year.

“I did not expect to win," said Kazmirek. "I am particularly pleased with the javelin and the pole vault. I had an injury problem during my preparation for Gotzis. My goal is to finish in the top five at the World Championships in Bejing.

"There was a super atmosphere here," he added. "Every time I come here, I want to return the next time."

Theisen-Eaton, watched by her husband and Olympic champion Ashton Eaton who pulled out of the decathlon late on Friday, won in Gotzis for the second time in her career, setting a national record of 6808.

The Canadian beat the former world junior champion Caroline Schaefer, who was second with a PB of 6547. World indoor champion Nadine Broersen from the Netherlands was third with 6531.

Theisen Eaton consolidated her leading position overnight after improving her personal best in the long jump to 6.72m. Only Germany’s Claudia Rath, fourth at the 2013 IAAF World Championships, jumped farther with 6.73m.

Dafne Schippers stayed in second place with a solid effort of 6.48m. Ukraine’s Anastasya Mokhnyuk produced the major change in the standings by overtaking Olympic champion Jessica Ennis-Hill and moving up to third thanks to her 6.54m jump.

With two events to go, Theisen-Eaton had built a gap of 130 points over Schippers.

Anouk Vetter from the Netherlands threw the javelin to 50.09m to move up from seventh to third. Theisen- Eaton increased her advantage slightly to 144 points over Schippers after her throw of 42.96m, while Vetter was now just 40 points behind Schippers in third place with only the 800m remaining.

Broersen improved her ranking from 12th to sixth thanks to having the best javelin throw with a distance of 53.65m while Schaefer reached 49.08m to move up from sixth to fifth.

Schippers sadly pulled out of the competition before the 800m due to a minor knee problem, understandably not wanting to take any risks ahead of a long season.

Ennis-Hill set the pace on the first lap of the 800m but Theisen-Eaton followed hard on her heels and tried to edge the Briton in the sprint for the line. But Ennis-Hill responded and held off her rival to win in 2:09.21 to Theisen Eaton’s 2:09.37, although the later secured the overall victory.

“I knew I was ready and fit but I was not sure I would be able to score such a high score," said Theisen-Eaton. "I'm particularly pleased with the high jump and the long jump and the 200m. My coach thought that I had the capability to set this score. Compared to my win two years ago, today the weather was much better this weekend than it was in 2013."

Ennis-Hill, in her first heptathlon since winning her Olympic title in front of a home crowd, scored 6520 for fourth place.