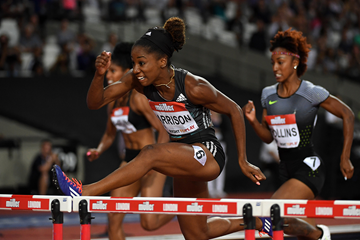 When Kendra Harrison’s Olympic dreams came crashing to earth at the brutal US Olympic Trials a few weeks ago, the second-fastest sprint hurdler of all time was forced rapidly to re-focus her season, setting her sights on winning the Diamond Race and smashing Yordanka Donkova’s 28-year-old world record.

“Only the record will make up for missing out on Rio,” she said yesterday at the press conference for the IAAF Diamond League meeting in London.

The first of those goals may have to wait a few weeks, but the second fell to the 23-year-old former cheerleader on a balmy evening at the Müller Anniversary Games in London on Friday (22) as she clocked a world record of 12.20* (0.3m/s) to clip 0.01 from one of the oldest marks on the books.

Harrison added a fourth IAAF Diamond League victory to her 2016 tally to open a 12-point lead on her US compatriot Brianna Rollins. But that paled in comparison as Harrison lived up to the promise she showed in Eugene seven weeks ago when she missed Donkova’s mark by just 0.03.

But the immediate favourite for Olympic gold could only finish sixth at the trials where the pressures of championship action proved too much. Tonight, though, she made no mistake, winning by a huge margin over 2013 world champion and US Trials winner Rollins, who was second in 12.57, and two-time world indoor champion Nia Ali who was fourth behind Kristi Catlin.

The fast-starting Harrison was miles ahead, running a perfect race as she skimmed over the hurdles and streaked across the line, stopping the clock at … well at 12.58, actually.

Harrison dipped so low at the line she ran beneath the beam, so the trackside clock recorded Rollins’ uncorrected time. For a few moments, there was an odd sense of disappointment, for Harrison had run 12.40 to win her heat just 90 minutes earlier.

Then, suddenly, the figures re-set to 12.20, the magic initials ‘WR’ flashing beside them. Harrison fell to track in tears, putting her hands to her face in utter disbelief.

“Initially I saw 12.5 and I was just happy to come out here and win. I was so happy when it came up and I was feeling really blessed.

“It shows that even if you don't go out there and make the team, you have to keep going and be strong. I just ran my best and look what happened.

“I wanted to come out here with a vengeance to show these girls what I have,” she added. “That 12.40 got my confidence back. I knew I had it in me. I ran as hard as I could today.”

Harrison wasn’t the only record breaker in tears tonight as Britain’s Laura Muir burst into floods after she obliterated a top-class field to break Kelly Holmes’ British 1500m record.

Muir took to the front after two laps and kicked in a last 400m of 61.61 to leave 2014 European champion Sifan Hassan trailing in her wake.

Muir crossed the line in 3:57.49, hacking more than four tenths from Holmes’ mark and more than a second from her personal best as she moved to second on the 2016 world list. It was the only British win of the night and clearly marks out Muir as one to watch in Rio.

“Breaking the British record blows my mind a bit,” she said. “I haven’t run a fast 1500m this year so I wanted to go out there and show the world what I can do.

“I think the performance shows what I'm capable of. You can't get much better than tonight.”

Hassan was clear in second in 4:00.87 with Sweden’s Meraf Bahta third in 4:02.62, both season’s bests. There were personal bests for Amanda Eccleston and Eilish McColgan as Muir dragged eight of the field to their quickest times of the year.

Muir’s victory moves her up to second in the Diamond Race while Shaunae Miller extended her slender lead at the top of the 400m standings with a commanding win over her nearest pursuer, Stephenie Ann McPherson, in a world-leading time of 49.55.

Miller strode after Natasha Hastings in the first half lap and then cruised past the field around the top bend before stretching her advantage down the straight to push Allyson Felix from the top of the world list.

It was a powerful statement of intent for the world silver medallist who notched up her third IAAF Diamond League victory of the year.

“I put in a lot of work for these competitions so I’m glad to see it's paying off,” she said. “It was a great feeling.”

McPherson chased the Bahamian home in 50.40 and is now five points behind Miller in the Diamond Race.

Christian Taylor was the focus of the IAAF Diamond League field events and the Olympic champion sealed his fourth consecutive win at this meeting, adding two centimetres to his world lead with 17.78m in the last round.

Ruth Beitia was desperately close to clearing 2.00m in the high jump but had to settle for a 1.98m victory over Bulgaria’s Mirela Demireva to move to the top of standings, while Jakub Vadlejch beat Keshorn Walcott in the men’s javelin with 85.72m.