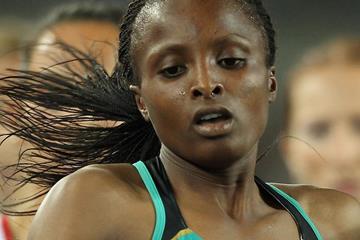 World indoor 3000m champion Hellen Obiri ran away from a top-class line-up at the 34th edition of the Kenya Defence Forces Cross-Country Championships, staged in testing conditions at the Moi Air Base in Nairobi on Saturday (18).

The upcoming winter is shaping up to be a busy one for Obiri with appearances at the IAAF World Indoor Championships and the African Cross-Country Championships pencilled in her diary, but her dominant performance shows she will be a factor at both events.

“I knew it would have been anyone's race if we stayed together until 100m left, so I decided to go earlier than that,” explained the world 1500m bronze medallist, whose next race is over 1500m at the Glasgow International on Saturday.

Obiri, who can also boast a 2:00.54 800m PB, stopped the clock in the 8km race at 26:41 to defeat sub-2:21 marathon runner Jemima Jelagat by a commanding 15 seconds with Sela Jepleting, by far the least well-known of the leading trio, a further seven seconds back.

Defending champion and arguable pre-race favourite Gladys Cherono figured in the early stages but the world 10,000m silver medallist wilted to fifth in 27:08.

Further back were the recognisable names of Sally Barsosio, the 1997 world 10,000m champion who is on the comeback trail aged 35, in fourteenth, and 2008 Olympic 1500m champion Nancy Langat in fifteenth.

In the men's race, 24-year-old Leonard Oloitiptip scored a repeat win over the 12km course in 35:50, eight and ten seconds ahead of Linus Chumba and Kiplimo Kimutai respectively.

The top six runners from both races will represent the Defence Forces at the Kenyan Championships on 15 February.

Frankfurt and former Boston Marathon winner Caroline Kilel clinched the victory in the women's race in Kericho while Bernard Kipchumba out-sprinted Eliud Mwangi for the spoils in the men's race.

The strongest fields of the weekend were in Iten where Peter Emase, who often runs on the roads in the UK, upset more renowned runners such as sub-13 5000m runner Jonas Cheruiyot and emerging youngster Cornelius Kangogo, while little-known Angela Temu won the women's race.

Other noteworthy victories were achieved by Ebuya's younger sister Alice Aprot in Eldoret and Charles Kimeli, a training partner of Geoffrey Mutai, in Baringo.