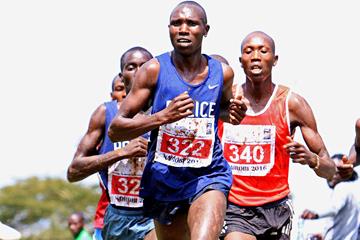 World cross-country champion Geoffrey Kamworor prevailed after the expected battle with Bedan Karoki while Alice Aprot had a crushing victory as the pair took the senior titles at the IAAF Permit/Athletics Kenya National Cross Country meeting in Nairobi on Saturday (13).

The anticipated clash between the individual gold and silver medallists from Guiyang did not disappoint at the penultimate IAAF Cross Country Permit meeting for this winter, which also doubled as the Kenyan Cross Country Championships.

The two favourites were in a leading pack of six that separated themselves from the rest of the field four kilometres into the 10km race. The group at the front was reduced to three over the course of the next 2km lap with African cross-country champion Leonard Barsoton still staying with Kamworor and Karoki.

After the bell, Karoki surged with almost a kilometre still to go and Kamworor in hot pursuit while Barsoton started to struggle. But Kamworor's superior finishing speed proved to be decisive and, with the tape in sight, edged in front before winning in 28:19.

“My focus is the World Half Marathon Championships next month, where I’m the champion and thereafter, I will start to prepare for the Olympics 10,000m in Rio to challenge my friend Mo (Farah)," said Kamworor. "That is my main focus.

“Today’s race was not easy," said Karoki. "I’m happy to finish second here despite missing out on my fourth national title."

Inside the first two kilometres of the corresponding women’s 10km race, it was clear that the defending champion and pre-race favourite Faith Kipyegon was struggling. She later dropped out, citing illness after her return from Europe following wins on the IAAF Cross Country Permit circuit in Spain and Italy last month.

With the world 1500m silver medallist quickly out of the equation, Alice Aprot – a sister to the 2010 world cross country champion Joseph Ebuya – took charge, surging forward at four kilometres to capture her first domestic senior title in 31:13 and winning by more than a minute.

She is unbeaten this year with three consecutive wins at IAAF Cross Country Permit races, her previous victories coming last month at the Campaccio and Antrim events in Europe.

“The race was not easy," she said. "The course was muddy and I kept slipping. I decided to go out early since I don’t have good finishing speed, and leave it for the others to try to catch up. Having to drop out of the World Cross team last year motivated me to train harder since I was not happy at all.

“My elder brother (Ebuya) has been encouraging me and that’s why I’m getting into better shape," she added. "As a junior runner I was afraid, but staying with senior athletes has given me more belief. My target for (the African Cross Country Championships on 12 March in) Cameroon is to win a medal."

With her younger and more famous sister Kipyegon out of the reckoning, Beatrice Mutai rallied over the last kilometre to land second place in 32:28.

“My sister told me to go for it since she was not feeling well and I’m happy to finish second and make the Kenya team (for the African Cross Country Championships)," said Mutai, who finished 11th at the 2013 IAAF World Cross Country Championships. "I opted to preserve my energy until the closing stages and go for it but Alice had opened a huge gap and finishing second in such a tough race is great."

Stepbrothers Nickson Kiplagat, 18, and Andrew Lorot, 19, who hail from the far-flung northern Rift Valley county of Pokot, dominated the closing stages of the junior men’s 8km and finished in the first two places, the younger step-sibling winning in 22:46 and by one second.

“If I go to Yaounde, I will go and bring something home," said Kiplagat. "I will train harder than I did for this race. I train with my brother in school so having him in this race helped us push."

“The big challenge was that part of the course was water-logged," added Lorot, the African junior cross-country silver medallist. "I knew I could win but I let him do it today because he is my brother. We share the same father but different mothers. I will train thoroughly for Yaoundé to have the victory to myself."

In the opening race of the day, Sandrafelis Chebet, the world youth steeplechase silver medallist, ran away from the field on the second of the three 2km laps in the junior women’s 6km to win in 18:48, her fifth victory on home soil this winter.

“It was good coming here and running with the Kenyans,” said Merhouwit Ghide, who will represent Eritrea in the forthcoming Africa Cross Country Championships. "It was tough but will help me run well for my country in Cameroon."

Mutwiri Mutuota for the IAAF