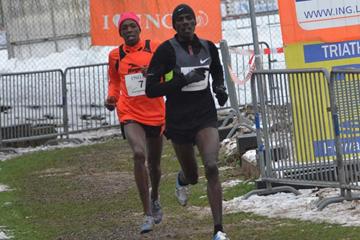 Kenya’s Albert Rop and Ethiopia’s Eleni Gebrehiwot were the winners of the ING Eurocross - an IAAF Cross Country Permit Meeting - in Diekirch, Luxembourg, on a snow covered course and in almost freezing condition on Sunday (27).

Albert Rop had been a pre-race favourite and he confirmed the pundits’ opinion when he took the initiative early in the men’s 10.2km race.

The 18 year-old Kenyan was in the lead right from the start but two others initially went with him: his fellow Kenyan Alex Kibet and Burundi’s Onesphore Nkunzimana, the latter a three-time winner of the event in the past.

However, before three kilometres were up, Nkunzimana could no longer cope with the relentless pace of the two Kenyans as Rop continued to push hard.

The two built up a big lead but when it then came down to a sprint finish, Kibet was found wanting. With 400 metres to go, Rop was able to open a small gap and held on to it all the way to the line.

Rop crossed the line in 31:11, two seconds ahead of Kibet. “After taking second place a year ago, I am very happy to have now won this event,” said the teenage winner.

Behind the two Kenyans Ethiopia’s Melaku Belachew had moved up into third place with two laps to go before crossing the line in 31:57 while Onesphore Nkunzimana took fourth in 32:18.

Dutch runner Khalid Choukoud was the leading European in fifth place with 32:32. The Moroccan contingent were not as strong as anticipated, Mohammed Moustaoui was the best of them in sixth place with 33:30.

The women’s 5.35km race saw Ethiopia's pre-race favourite Almaz Ayana cancel her participation at short notice and, instead, it was her countrywoman Eleni Gebrehiwot who dominated the race and confirmed the form she had shown when finishing third in the high-quality race IAAF Cross Country Permit Meeting in Brussels last month.

For the first 1.5km, there was a leading group of six athletes running together but that was before the 28 year-old Gebrehiwot had another idea.

When the runners were going up the hill on the first long lap – after two initial shorter laps – she ran away from her rivals and was on her own from that point. Building a substantial lead in the following two laps, Gebrehiwot finished in 19:17.

Ethiopia’s Mestawet Tadesse managed to hold on to second place with 19:59 as Morocco’s Fathia Benchatki closed on her during the final lap but eventually finished third with 20:03.

Poland’s Agnieszka Ciolek was fourth with 20:10, Ukraine’s Catherine Karmarenko finish with 20:57, and Kenya’s Masila Ndungu completed the top six in 20:59.

“Of course I am very happy with my performance today,” said Eleni Gebrehiwot, who lives in western Germany. Married to a German, she speaks the language well and hopes to receive citizenship of her adopted country by the end of this year with a view to competing for Germany in 2014.

“The weather was not ideal, but it could have been worse. The course was alright for running, and overall we are happy with how the event went,” said race director Antoine Moureaud, whose team had to clear snow from a steep downhill section just before the races got underway.