Reigning world half marathon champion Jacob Kiplimo from Uganda and Tsehay Gemechu from Ethiopia claimed the victories at the 64th edition of the Campaccio in San Giorgio su Legnano, Italy, the first leg of the pandemic-shortened World Athletics Cross Country Permit series, on Sunday (21).

The race really hotted up when an eight-men leading group, headed by Tuemay and Melak, went through the third kilometre mark in 9:13.

Faniel then reached the midway point in 15:38 with a one-second lead over Tuemay, Kiplimo, Aouani and Melak.

Then Melak, Kiplimo and Chelimo pushed the pace, breaking away from Auoani and Faniel at kilometre seven. Kiplimo then launched his attack, opening up a three-second lead over Melak during the fourth lap, going through eight kilometres in 23:35.

Kiplimo stumbled in the ninth kilometre, but fully recovered. Melak tried to close to gap in the waning stages by the 20-year-old Ugandan responded and held on, crossing the finish line in 29:07. It marked his first victory at the Campaccio and his second cross country victory in Italy after his triumph at the Cinque Mulini in 2018.

Melak finished second in 29:10 with Chelimo, Kiplimo’s younger brother, completing the podium in 29:14.

“Unfortunately I fell during the last lap, but it was a good race,” Kiplimo said. “I enjoyed running on this course.”

Kiplimo said he’ll open the track season in Ostrava in May, but hasn’t yet decided which distance he’ll run at the Olympic Games.

In the women’s contest, Gemechu and Kenyan Lilian Rengeruk dominated the 6km race, taking command early on. They reached two kilometres in 6:17 with a 12-second gap over Burundi’s Francine Nyomokunzi, and three in 9:33. Rengeruk continued pushing the pace, reaching five kilometres in 16:04, with Gemechu close behind.

The battle for the win came down to the final sprint, when Gemechu launched her kick 150 metres from the finish line to take the victory in 19:03, three seconds clear of Rengeruk.

Tsige Haileslase from Ethiopia was third in 19:56 ahead of Nyomokunzi (20:08) and Addisalem Belay Tegegn from Ethiopia (20:13). Francesca Tommasi was the top Italian runner, finishing sixth in 20:15.

Gemechu finished fourth in the 5000m at the 2019 World Championships, clocking a 14:29.60 lifetime best. She was sixth at the World Cross Country Championships earlier that year.

“We broke away at the start of the race and continued running at a fast pace,” said Gemechu, who’s targeting a 5000/10,000m double at the Tokyo Olympic Games. “I am very happy with the win and I really hope to score another win next week at the Cinque Mulini.”

Rengeruk was aiming to win the Campaccio for the second time three years after her triumph, but she had to settle with the runner-up position.

“I felt very well from the beginning of the race, but it was cold,” she said. “It’s a hard course, but I enjoy running this race.” Rengeruk said she’s hoping to contest the 5000m in Tokyo. 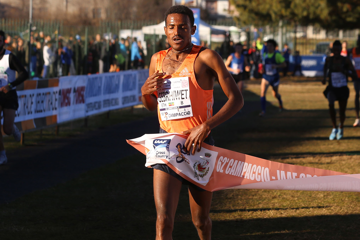 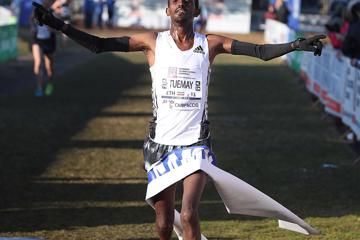