World silver medallist Vincent Kipruto, the fastest runner in the field with the marathon best of 2:05:13, lived up to expectations in Otsu to win the 68th annual Lake Biwa Mainichi Marathon but the time was a relatively slow 2:08:34.

“It was cold,” said Kipruto after a race where the weather was cloudy and temperatures never climbed above 7°C. “It was really windy, so I did not want to make a move early.”

It was Kipruto’s second Marathon victory to date, following the 2009 Paris Marathon which he won in 2:05:47. Although he has broken 2:06 on two other occasions, he was unable to win a Marathon until today at Lake Biwa. Having failed to break 2:10 in his past three races, today Kipruto showed that he is back in form.

At 22km Jufar made his move and surged ahead of the pacemakers by covering that kilometre in 2:52, but no one was willing to follow him. The pacemakers soon reeled him in as the lead pack regrouped.

Twenty-two runners were left in the lead pack at 25km (1:15:53), but after 26km Kirui suddenly fell off the pace. He manage to get back to the lead pack but only temporarily before falling back for good.

As the pace makers dropped out at 30km (1:31:37) the lead pack started to disintegrate and by 32km, only seven runners –Kipruto, Jufar, James Mwangi, Ryo Yamamoto, Masakazu Fujiwara, Suehiro Ishikawa, and Kohei Matsumura – were left in front.

Soon Fujiwara started to share the lead with Kipruto and a few minutes later both Yamamoto and Matsumura started to lose contact with the leaders.

At 37.6km Jufar surged into the lead and only Kipruto was able to cover him. Mwangi slowly tried to regain contact and he finally re-joined the leaders before 40km, only to be left behind again.

The duel between Kipruto and Jufar continued to the track. With little more than 400m left in the race, Jufar took over the lead but Kipruto wouldn’t let him go. Then with 100m remaining, Kipruto sprinted ahead and won with 2:08:34. “At 41km I felt confident that I could win the race,” said Kipruto.

For the Japanese athletes, Lake Biwa was the all-important final Marathon selection race for the World Championships. Ten years after making his Marathon debut in Lake Biwa, Fujiwara was the highest Japanese finisher with a time of 2:08:51, just 17 seconds behind the winner. Since his splendid 2:08:12 debut ten years ago, Fujiwara had showed flashes of brilliance from time to time, but he was not considered back in form until today.

The race was also the national championships for the men’s marathon, so Fujiwara was crowned as the national champion. “When I was left behind at 37km, I was not breathing hard, but my leg was heavy already, and that was the reason why I could not cover the move,” explained Fujiwara at the post-race press conference.

The domestic qualifying battle for men is now over, but the JAAF will consider the results from London and Boston, after which the Moscow marathon team will be announced on April 25.

“I look forward to hearing my name in the team list,” said Fujiwara after the race. Yamamoto followed Fujiwara fifteen seconds later and thus his dream of making the Marathon team is probably dashed.

BACK
Pages related to this articleAthletes
Masakazu Fujiwara 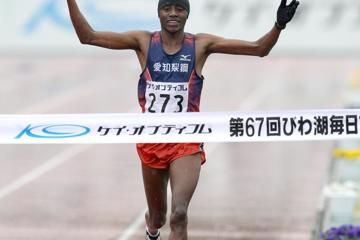