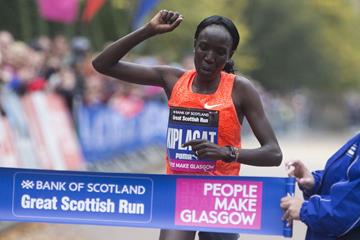 Kipsiro and Kiplagat top the podium at Great Scottish Run

Kipsiro, who took the 10,000m gold medal when the Commonwealth Games came to the city last year, headed a leading pack of four that emerged in the early stages of the half marathon.

The two-time world cross-country medallist had only competed over a half marathon once before but timed his race well and a turn of acceleration over the final six kilometres saw him cross the line in a personal best of 1:02:18.

“I enjoyed the run, it was a nice smooth race,” Kipsiro said. “I thought it would be difficult coming in but I was confident in my running, especially when it came to the break. I was feeling OK at 15 kilometres and I could have sat for a while. But I said to myself: ‘no, it’s time to make a push.’ And I went for it.”

For much of the race, he was tracked by local favourite Callum Hawkins and Kenya’s 2013 IAAF world cross country champion Japhet Korir, who dropped Eritrea’s Tesgai Tewelde just after the halfway point.

However, once Kipsiro made his break, Hawkins – who is currently gearing up for his marathon debut in Frankfurt on 25 October – had to settle for duel for second place with Korir.

The Great Britain international produced a late flourish to set a personal best of 1:02:42, which augurs well for his marathon outing in the German city in three weeks’ time, with Korir 32 seconds behind.

“I felt strong out there,” Hawkins said. “I didn’t have any problems until he just got a few metres on me. I suppose I should have tried to go with him but I’m pleased with that kind of time going into Frankfurt. The full marathon is a lot different but it makes me believe I can do well.”

Kiplagat successfully defended her women's title in 1:08:21 with the two-time former world marathon champion getting a morale-boosting win after the disappointment of coming fifth in the IAAF World Championships, Beijing 2015 marathon just over a month ago.

The Kenyan, who is targeting an elusive Olympic medal in Rio next summer, raised the stakes with a surge to the front after 10 kilometres, leaving her compatriot Doris Changeywo behind in a chasing group of three.

However, nothing troubled the 36-year-old over the second half of the race and she finished 1:29 ahead of her fellow Kenyan, albeit 24 seconds slower than her win 12 months ago.

Changeywo was second in 1:09:50 with Gemma Steel, last year’s European cross country champion, the leading Briton in third, six seconds in arrears but just holding off the 2014 European 10,000m gold medallist Jo Pavey, who was fourth in 1:09:58.

“I should have got closer to Changeywo but I didn’t quite get things right,” said Steel. “But I’ll learn from it and get ready to defend my European cross country title (in Toulon-Hyere, France, on 13 December).”

Pavey, now 42, ran the second fastest time by a European runner over 40 and was just two seconds shy of the continental best set by Russia's Irina Permitina in 2008.