Edwin Kipyego and Peres Jepchirchir confirmed their status as favourites for the 37th edition of the Marseille-Cassis 20km, an IAAF Silver Label Road Race, with the Kenyan pair winning over the challenging course along France’s Mediterranean coastline on Sunday (25).

Like plenty of winners of past editions, both Kipyego and Jepchirchir made the decisive surges on the Col de la Gineste, the tough 327m climb at halfway, just outside the French port town of Cassis.

After a fast opening quarter of the race, Kipyego started to push the pace hard. Only Eritrea’s Berhane Tekle was able to stay with the Kenyan initially but on the first uphill section of the race, coming after the fifth kilometre, the 2012 winner made a second move and this time Tekle couldn’t respond.

The gap continued to grow over the next kilometres with Kipyego already holding a decisive lead on the Col de la Gineste, and the 24-year-old Kenyan eventually won with relative ease in 57:18.

“I’m very happy," he said. "I wanted to force the pace at the foot of the climb to be sure to make the difference."

Kipyego's time wasn't a course record because the distance was shortened by about 400 metres in the days before the race due to road works near the start line in Marseille.

However, it is likely Kipyego would have fallen just outside the course record which is still held by Ethiopia’s Atsedu Tsegay, who ran 58:11 in 2011.

Tekle hung on to second place in 58:45, more than a minute behind Kipyego, with the 2014 winner Titus Mbishei coming through for third in 58:55.

Jepchirchir not only extended the Kenyan winning streak in the women’s race to six editions but also became the first woman to win back-to-back Marseille-Cassis titles since Morocco’s Hassania Darami won a second time – when the race was a half marathon – in 1988.

From the gun, a small group detached itself from the rest of the field. Jepchirchir, Bahrain’s Shitaye Esthete and Kenya’s Perendis Lekabana led the pack.

Jepchirchir then pushed the pace at the end of the Col de la Ginest before securing her win on the long descent towards Cassis.

She crossed the finish line in 1:06:01. Unlike Kipyeo, she almost certainly would have improved the course record, which remains in the hands of her compatriot Mercy Kibarus, who ran 1:07:58 in 2012.

“If the climb was very difficult, the race was easier than last year because weather conditions were better with less wind,” said Jepchirchir.

Jepchirchir’s win adds to her string of impressive victories this autumn.

It’s her third win in a row after running personal best times at the Prague 10km in 30:55 and at the Mattoni Usti nad Labem Half Marathon in 1:07:17.

Esthete, sixth in the 10,000m at both the 2012 Olympics and at the 2013 IAAF World Championships, was second in 1:06:56 which itself was an impressive result but also shows just how good Jepchirchir’s run was.

Lekabana rounded out the podium in third place with 1:07:15.

BACK
Pages related to this articleAthletes
Edwin Kipyego 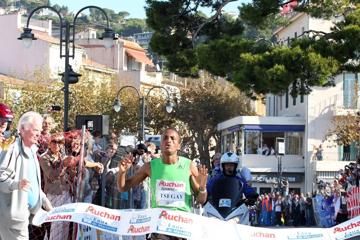 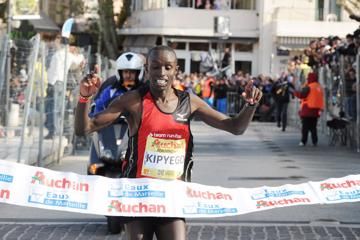 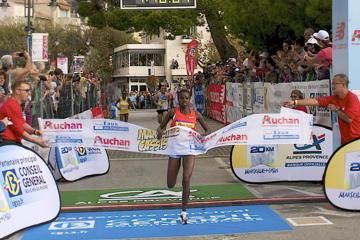 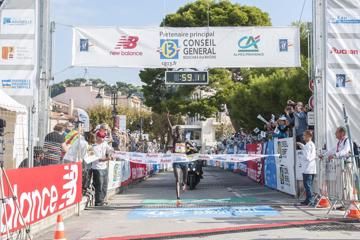