Steel, the European cross-country champion, made much of the running in trying conditions and was rewarded with victory in 33:03, four seconds clear of Britton in 33:07 with Spain’s Alessandra Aguilar third in 33:11, and Italy’s world and European marathon silver medallist Valeria Straneo a detached fourth in 34:02.

There was a headwind for the first half of the race which kept many in contention with Steel, a late addition to the start list, testing the legs and the lungs of her rivals before pushing on at 5km.

“I just wanted a good honest race with no altitude and no Kenyans,” joked Steel afterwards, reflecting on her 18th place at the IAAF World Cross Country Championships in Guiyang, China, last month.

“It was windy,” she confirmed of the conditions but it’s something she’s used to in Dublin. “It’s been worse but conditions today let me down a little bit. In 2012 I ran 32:06, so on a good day it shows you it is quite a fast course.

“I went off just in contention. I didn’t take the pace on too early and tried to test people out on the hills and at five kilometres I made a little break. They were breathing a lot heavier than me. I felt really strong.”

Britton closed towards the end but, in reality, Steel had plenty to spare over the two-time European cross-country champion.

“I wasn’t really worried because I knew I had a gap unless she put a real sprint in," said Steel. "I knew I couldn’t take anything for granted. I just had to keep pushing really until I put it in the bag.”

“I was just looking behind because everyone was rooting for her (Britton) and thought that will spur her on a little bit more,” commented Steel about the fast-finishing domestic star.

Despite the defeat, it was a much improved performance for Britton whose previous best was 33:54 from last year and it is a clear indicator that her recent coaching change and the link-up with Catherina McKiernan's former coach Joe Doonan is already beginning to bear fruit.

“It was better than last year,” confirmed Britton, who won the national 10km title which was being held in conjunction with the race.

“Obviously you want to win. I did think I could win while I was running (during the race) and halfway round I felt good.

"She (Steel) got that little gap and I knew even warming up out the back whoever gets in front (in the final kilometre) is not going to get caught because you have the wind behind you. I just couldn’t get my legs to turn over any quicker. It was hard to close the gap when it’s like that.”

Japhet Korir effectively clinched his victory with three kilometres remaining in the men’s race and, with the wind on his back, the Kenyan retained his title with relative ease in 28:15.

Ethiopia’s Birhan Nebebew was second in 28:21 with Kenya’s James Rungaru only one second further back in 28:22.

“I pulled away after 7k,” said Korir. “Conditions were difficult but I pushed hard. I was happy with my run and felt good.”

The 2013 world cross country champion’s next assignment is to qualify for the 5000m at the IAAF World Championships in Beijing in August. “I will run on the track now,” he confirmed.

The men’s race, much like the women’s, only really got going halfway through; a brief smattering of hailstones didn’t help proceedings.

It was left to Nebebew and Rungaru to challenge the defending champion but they had no answer to his surge with three kilometres remaining.

Mark Christie was the first Irishman home in 30:10 to claim the national title. The men’s mile kicked off the main programme in the Phoenix Park, one of the largest walled city parks in Europe.

A strong headwind for the first half scuppered any chance of a sub-four-minute winning time and European indoor 800m silver medallist Mark English found the increase in distance tough to handle.

This cleared the way for Great Britain’s Jonny Hay who edged the Netherlands’ Wouter Ploeger, although both were credited with the same time of 4:12. Spain’s Marc Alcala finished third in 4:13.

BACK
Pages related to this articleAthletes
Alessandra Aguilar 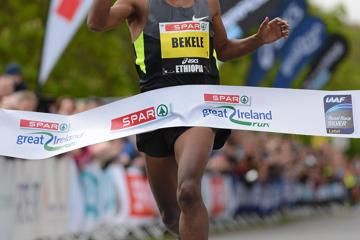 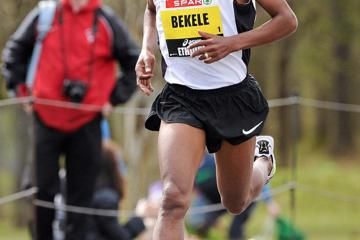 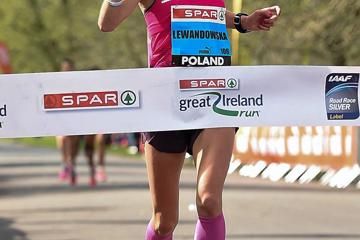