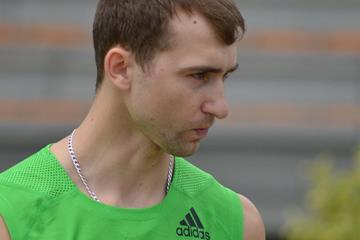 Andrei Krauchanka at the 2013 Multistars in Florence (Organisers) © Copyright
02 MAY 2013 Report Firenze, Italy

Belarus’s 2008 Olympic silver medallist Andrei Krauchanka was the leader at the halfway point in the men’s decathlon with 4225 at the Multistars Firenze Trofeo Zerneri Acciai, the opening meeting of the 2013 IAAF Combined Events Challenge, at the Luigi Ridolfi stadium in Florence on Thursday (2).

The Netherlands’ Anouk Vetter claimed first place overnight in the women’s heptathlon with 3553 points, ahead of her compatriot Nadine Visser, who was second after four events with 3392 points.

Great Britain’s John Lane made his mark in the first event and was the fastest man in the 100m with 10.79, ahead of Italy's 2013 indoor heptathlon champion Michele Calvi, who clocked the second fastest time with 10.87

By contrast, Krauchanka had a tentative start and clocked 11.16 compared to his personal best of 10.86 but he took the overall lead after two events with 1733 points after getting the best result in the long jump with 7.39m.

Poland’s Pawel Wiesiolek started with 11.01 in the 100m and followed that up with 7.24m in the Long Jump to move up to second overall place with 1725 points as, sadly, the 100m winner Lane was forced to pull out of the competition due to injury.

Krauchanka then also won the Shot Put with 14.76m, his best ever result outdoors, to take his tally to 2508 points after three events as Calvi continued his good first day with a personal best of 14.60m to move up to take second overall place with 2447 points.

In the High Jump, Wiesolek had an outstanding competition in which he first equalled his best with 2.04m and then improved it twice with clearances at 2.07m and 2.10m to move up to second in the overall standings with 3308 points. Krauchanka cleared 2.07m to maintain his lead with 3376 points.

Great Britain’s Ashley Bryant improved his 400m best to 48.10 to win over one lap of the track and climb to third place overnight with 3977 points. Krauchanka clocked 49.27 to defend his lead with 4228 points while Wiesolek clocked 50.19 to move his total along to 4114 points for second place.

“It was a solid day. I did not score great results but it was a positive day for me. I am quite pleased with my results after two years of being plagued by a heel injury,” reflected Krauchanka.

Dutch delight on day one

In the heptathlon 100m hurdles, the Netherlands’ 18-year-old Nadine Visser won the first heat in 13.72 while Great Britain’s Karla Drew clocked exactly the same time in the second of three heats when improving her best to 13.72.

Poland’s Agniewska Borowska won the High Jump by clearing a personal best of 1.87m, before missing three attempts at 1.90m, to go into the lead after two events with 1983 points.

However, the Shot Put produced a major overhaul at the top of the standings as 20-year-old Anouk Vetter took the overall lead with 2662 points after sending her implement out to 13.86m, the second best result of the event behind Brazil’s 2012 IAAF World Junior Championships bronze medallist Tamara De Souza who improved her shot put by more than half-a-metre to 14.86m, to move up to second place just one point behind Vetter.

Ireland’s Kellie Proper, her country’s Long Jump record holder with 6.60m, flew to a fast 24.10 to win the 200m but it was the Dutch pair of Vetter and Visser who finished the first day in first and second place in the overall standings.