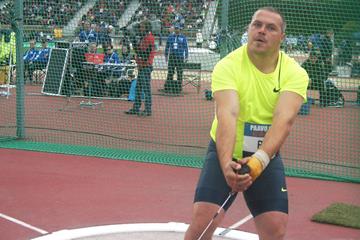 Pars triumphs in Turku to extend his unbeaten streak

Olympic champion Krisztian Pars continued his unbeaten streak in this season’s IAAF Hammer Throw Challenge with a winning throw of 79.83m at the 52nd edition of Paavo Nurmi Games in Turku, Finland, on Wednesday (25).

The 32-year-old Hungarian, and 2014 world leader with 81.57m that he threw in Ostrava nine days ago, produced his best effort in the third round and stayed in front for the rest of the competition.

Dilshod Nazarov, from Tadjikistan, held the lead after two rounds with a 77.93m effort, but could not improve.

Pars, who has now won his past seven competitions, also had the second longest throw in the competition in round four with his hammer landing at 78.37m, while Nazarov’s came close to his best effort in round six with 77.73m.

Local hope David Soderberg achieved a season’s best of 76.05m in round two for third place, his best mark since July 2012.

Russia’s European Team Championships winner on Saturday, Sergey Litvinov, was several metres down on his Brunswick performance and had to settle for fourth with 74.71m with Germany's Markus Esser fifth at 74.27m. Egypt’s Mostafa Hicham Al-Gamal finished in a disappointing sixth with 73.88m, well down on his 81.29m African record earlier this season.

Despite the temperature being a relatively cool 15 degrees Celsius, there was a great atmosphere.

The Paavo Nurmi Stadium, with a capacity of 10,200 spectators, was full for the first time since 1997, the 100-year anniversary of Paavo Nurmi's birth, and the same year the stadium was named after the nine-time Olympic champion.

Finns in fine form in the javelin

Naturally, with the meeting held in Finland, one of the highest standard contests was seen in the men’s javelin.

Finland’s Olympic bronze medallist Antti Ruuskanen opened with a decisive 83.54m throw, but didn’t hold on to the lead for much longer.

Egypt’s Ihab Abdelrahman El Sayed, the world leader with 89.21m in Shanghai five weeks ago, unleashed a 84.45m opener, his third best career throw with the two that came in the same Shanghai competition.

Germany’s Thomas Rohler also reached 82.86m in the first round, but there was plenty more to come.

Tero Pitkamaki, the Moscow 2013 silver medallist, then took the lead back for Finland with his second throw landing at 85.89m, a season’s best and the farthest Finnish throw of the season.

Ruuskanen then moved up to second place with his third-round throw of 85.28m, his first 85-metre throw of the season.

Sadly, none of the leading throwers improved in the final three rounds although Pitkamaki also reached 84.75m with his sixth throw to make it a Finnish one-two with El Sayed third.

In the rest of the events, several stadium records fell in the women’s competitions.

Cuba’s Mabel Gay topped the triple jump with a wind-aided 14.07m, and Wenda Nel of South Africa clocked 56.77 to win the 400m hurdles.

In the high jump, Romania’s Mihai Donisan cleared 2.26m and made three good attempts at 2.30m with Finland’s Jussi Viita equalling his personal best of 2.23m for second place. Ukraine’s Heorhiy Bykov won the pole vault with a 5.46m personal best while Kenyas Elijah Manangoi of Kenya won the 1500m in 3:38.99.