Kucherenko and Kucheryanu grab the spotlight in Volgograd, good marks in Moscow

Public attention and the TV cameras during the traditional  Governor’s Cup  meeting in Volgograd was fixed on the local long jumper Olga Kucherenko, who responded in fine style and jumped 6.90m on Saturday (26).

Last weekend in Krasnodar, she went out to a world-leading distance of 7.00m and for good measure, in Volgograd, she also had a jump at 6.86m. Svetlana Denyayeva was second here with 6.61m.

Sergey Kucheryanu cleared 5.65m in the Pole Vault while there was a fast 1500m which saw Vladimir Smirnov confirm he is in good form and win in 3:38.67, with Kenya’s Collins Cheboi second in 3:39.81.

Overseas guests also made an impact in Volgograd. St Kitts sprinter Antoine Adams won the 60m in 6.70 while Ukraine’s Volodymyr Burakov took the 400m in 47.71, and his compatriot Mariya Ryemyen took the plaudits in the women’s 60m with 7.20.

The two duels between Jamaica’s Patricia Hall and Russia’s 2011 World Championships 400m medallist Antonina Krivoshapka ended with honours even. Hall won the 200m in 23.57 with Krivoshapka second in 23.70 while there Russian was just better in the 400m, winning in 52.57 to Hall’s 52.85.

Aleksandr Bulanov improved to 19.75m to win the Shot Put while Irina Tarasova was on top in the women’s event with 18.24m.

Russian star and former World champion Tatyana Lebedeva was only fourth in a tight Triple Jump with 13.71m, victory going to Valeriya Zavyalova with 13.86m.

There were also many good results during the two days of the Moscow Championships as well.

The second day on Saturday saw Yelizaveta Savlinis have a pair of fast 200m outings, with 23.32 in her heat and 23.33 in the final.

Natalya Kutyakova bounded out to 14.16m in the Triple Jump as former World Championships medalist Anna Pyatykh, in her first competition since 2011, was third with 13.23m.

There were swift 800m times in two separate races. Yelena Kotulskaya, more commonly known by her maiden name Kofanova, was the fastest woman of the day in 2:01:38 with Alena Glazkova just behind her in 2:01.58. In another race, Marina Pospelova clocked 2:02.05.

In the Russian capital on Friday (25), Kseniya Zadorina was the fastest over two laps of the track and won the 400m in what was briefly a world-leading time of 52.24; in another race Nadezhda Kotlyarova clocked 52.38.

Anna Shchagina was the best in the 1500m and improved on her absolute best over the distance by almost four seconds with an outstanding 4:09.95, the second fastest time in the world this year. Aleksandra Antonova ran 8.10 in the 60m Hurdles and Angelina Krasnova (nee Zhuk) improved to 4.55m in the Pole Vault while Oksana Zhukovskaya won the Long Jump as a guest with 6.68m.

The 60m titles went to Viktoriya Yarushkina in 7.30 and Pawel Vruchinskiy in 6.73 while the 2004 Olympic Games 800m winner Yuriy Borzakovskiy dropped down distance and won the 400m in 47.33.

Veronica Mosina and Maksim Kolesnikov won the Long Jump titles at the St Peterburg indoor championships with 6.68m and 7.94m respectively on Friday. 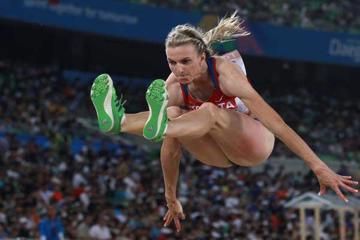