London Olympic silver medallist Erik Kynard has yet to have a High Jump workout outdoors this season because of wintery conditions in Manhattan, Kansas where he attends Kansas State.

That was not a disadvantage for Kynard in the warm temperatures and blue skies at the Mt San Antonio College Relays at Hilmer Lodge Stadium in the Los Angeles suburb of Walnut, California, on Saturday (20 April).

Kynard cleared a world-leading 2.34m in his second outdoor meeting to win a competition that featured four jumpers over 2.28m. Reigning World champion Jesse Williams and Canada’s Michael Mason tied for second at 2.31m, while US indoor champion Dusty Jonas was fourth at 2.28m.

Kynard equalled the meet record set by Williams in 2011. Both Kynard and Williams, the 2005 and 2006 NCAA champion, train at USC under Kansas State coach Cliff Rovelto.

Okagbare also ran the anchor leg on a women’s 4x100m Relay with Mandy White, Carmelita Jeter and Lauryn Williams that ran a world-leader 41.79 – the fastest time in the world outside of a major championships since 2009. A quartet featuring Dawn Harper, Allyson Felix, Jeneba Tarmoh and Ginnie Crawford, all trained by Bobby Kersee, placed second in 42.96.

Kynard ahead of schedule

The 22-year-old Kynard jumped 2.27m in his outdoor debut to finish behind 2012 London Olympic bronze medallist Derek Drouin from Canada in the Texas Relays on 30 March.

Kynard said he was bothered by a muscle strain in his lower back during the competition and felt that he was capable of equalling his PB of 2.34m, set when winning the 2012 NCAA Championships.

“I had some things going on in my body that I wasn’t aware of. It was great ammunition to keep going,” Kynard said. “I didn’t go to the chiropractor like I did before the meet and the week caught up with me. I knew it hurt but things hurt and things go wrong. It’s how you react that makes you a champion.”

On Saturday, Kynard was perfect through his first five heights to 2.31m before a third-attempt clearance at 2.34m to win the competition. The free-spirited Kynard, who wore a cardboard crown from Burger King during the 2012 NCAA Championships, grabbed the bar and shouted at it after several misses.

“It was nothing nice. I can’t tell you what I said. You’ll have to bleep it out,” Kynard said.

After clearing 2.34m, Kynard stuck out his tongue and flashed peace signs with both hands. Kynard jumped 2.32m in practice and believes that 2.37m – the height at which he missed three times on Saturday – is within his reach this season after his silver medal performance in London.

“It will come,” said Kynard of that height. “(The Olympics) was a confidence booster but I am a pretty confident guy already. It was a great experience. Not many people do it at the age of 21. It feels good to have a target on your back. You have to aim high to beat this guy.”

In the women’s 100m, World champion Jeter looked well on her way to victory in her season debut until pulling up at the 70m mark, favouring her left leg. Aided by a 1.8m/s tailwind, Gardner – running in the adjacent lane to Jeter’s – seized the moment to win in a world-leading 11.00 to surpass her PB and American junior record of 11.03 from 2011.

Long jumper Tori Bowie finished second in 11.14 and Miki Barber was third in 11.16 while Jeter limped across the line last in the nine-runner field in 11.68.

Jeter’s injury is believed to be a cramp according to coach John Smith and will likely force her to miss the Penn Relays and the IAAF Diamond League opener in Doha.

Yvette Lewis led five women under 13 seconds in the 100m Hurdles with her wind-aided mark of 12.43 (2.7m/s) to become the eighth fastest American under all conditions. Vashti Thomas placed second in 12.56.

Jeshua Anderson won the 400m Hurdles in 49.14 with Reggie Wyatt of USC second in a collegiate leading 49.58. London Olympic finalist Georgeanne Moline of Arizona won the women’s 400m Hurdles in 55.70.

It was a productive weekend for Decathlon World record-holder Ashton Eaton, who competed in the 200m, Shot Put and the 110m Hurdles. On Friday, Eaton ran a PB of 20.76 to win a 200m heat and threw 14.24m in the Shot Put.

Plans are in the works to renovate Hilmer Lodge Stadium in the late autumn to make a bid for the 2020 US Olympic Trials according to Mt SAC Relays elite athlete coordinator Brian Yokoyama.

The entire west grandstand and press box on the hillside which it is built on will be removed. The track will be reconfigured with a wider turns and a 400m practice track will be constructed. The school has $42 million (USD) earmarked for the project.

As a result, the 2014 Mt SAC Relays may be cancelled or relocated while the facility is being renovated. 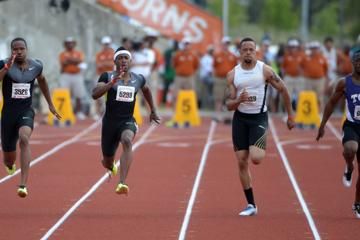 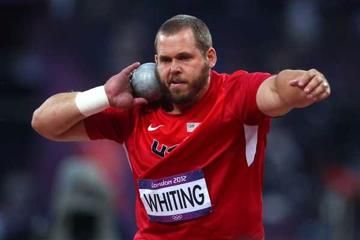