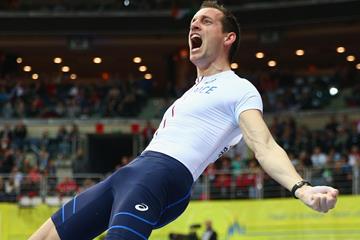 World Athlete of the Year Renaud Lavillenie opened his summer season with a victory in a ‘street vault’ competition held as part of the famous Drake Relays, clearing 5.80m on his first attempt in the US city of Des Moines on Wednesday (22).

The French pole vault superstar then unsuccessfully attempted 5.91m but was far from down-hearted, considering he was having to battle with the cold, the thermometer hovering around 12 degrees Celsius, and with swirling winds on downtown Des Moines’ Court Avenue.

"I’ve never jumped this high in April before and I have had two pretty intense weeks of training (in San Diego). I was not expecting to catch fire here as it is only the beginning of the season but I have started well," said a pleased Lavillenie, one of the most recognisable figures in the world of sport after his pole vault world record last year.

"It was not easy, everyone was battling with the wind. I am satisfied, I'm on a pole bigger than what I had last year at the European Championships in Zurich while I'm running off four strides less. I'm in a good momentum.”

His most recent competition prior to Wednesday was when winning the European indoor title in Prague with a world-leading 6.04m six weeks ago.

Lavillenie takes his unbeaten streak for 2015 to 10 competitions and the reigning Olympic and European has won 35 of his 36 competitions since the start of 2014, the only blot on the record coming when he failed to clear a height at last summer’s IAAF Diamond League meeting in Stockholm.

His main target for the summer is to become the first French pole vaulter to win an IAAF World Championships title, more-or-less the only thing missing from his professional portfolio.